Plummeting sales are not the only thing worrying the luxury-shopping world. As of late, there have been multiple incidents of counterfeit scams, theft, and even arm robbery. (Read: Chanel Heist in Paris). These problems are beyond the control of retailers, but still unfortunately damage them in substantial ways.

One of the latest handbag schemes involves designer handbags and Chinese knockoffs. As reported by ABC News, a Thai national woman living in Virginia on a student visa, Praepitcha Smatsorabudh, was arrested for wire fraud this past Thursday for buying, returning, and selling handbags illegally.

Smatsorabudh’s illegal business was developed through careful calculation. She would first purchase real designer bags, such as Gucci and Fendi, from high-end department stores online. At the same time, Smatsorabudh also purchased many knockoff bags from the Chinese and Hong Kong black markets. She would then take the fake handbags to the brick-and-mortar designer stores that she purchased the real bags from and obtain a refund. Smatsorabudh kept the real, expensive handbags she bought online to sell to people on eBay for a profit. She sold bags under the Ebay seller IDs RichGirlsCollection and LoukPeach. She also exploited her social media platforms (IG: @richgirlscollection) and frequented discussion boards to facilitate her sales. If you have come across her or bought a bag from one of these places, be sure to take steps to authenticate your bag.

Recently, investigators were able to trace the online purchases back to Smatsorabudh’s home and workplace in Arlington, Virigina. Authorities say Smatsorabudh travelled to 12 different states to return the fake bags to high-end retailers. She also spread out how often she bought and sold the bags. According to evidence, she bought at least one designer handbag a week from 2014-2015. Smatsorabudh even purchased so much from one retailer that she became their top customer throughout the world. By estimates, Smatsorabudh probably pocketed at least $1 million from the scam. If she is convicted guilty of wire fraud, she faces up to 20 years in prison.

Unfortunately, there are still many scams like this that happen on both larger and smaller scales. Does the recent attention to violent events in the luxury world scare you? Do you think this is a trend that will only increase?

Share your thoughts on this story and similar incidents below in the comments!
Picture courtesy http://www.nydailynews.com 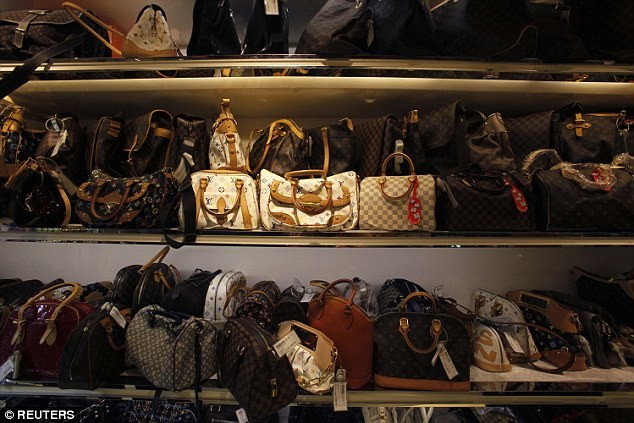 This is just scary!!!! I’ve never bought a designer handbag except from the original store but this just shows that maybe that is not enough!!!! How can these stores accept the fake bags don’t they check them out! I think the names and branches of these stores should be published so that their customers beware of the bags they’ve bought during that time.

This is just scary!!!! I’ve never bought a designer handbag except from the original store but this just shows that maybe that is not enough!!!! How can these stores accept the fake bags don’t they check them out! I think the names and branches of these stores should be published so that their customers beware of the bags they’ve bought during that time.

That’s the reason why I don’t buy “pre-loved” bags or “good deals” out there. I’d rather a million times pay more and get it from the boutiques and guarantee authenticity and my piece of mind! ??

OMG! I knew the fake world is big out there, but that is putting a lot of thought behind it!!! That is sickening, she should do jail time, it is illegal to pass the border in Switzerland with any type of fakes and if they get you, you are very heavily fined, even for a fake Lacoste coming exactly from Thailand… They regularly ( in France ) put anything fake in a lot and pass over with a : rouleau compresseur, sorry I can’t think of the english word…what they use to flatten the road….. I often saw it, watches, sun glasses etc,etc….

I was sold a super fake Chanel bag a month ago with an original Chanel receipt. Got it authenticated which took 3 weeks as super fakes are getting better. I confronted the seller who agreed to give me my money back but the seller kepted saying it was authenticate and took us to Chanel to try and prove it as she had the original receipt.
Chanel took my authentication certificate and accepted the super fake bag the seller sold me without any questions they offered the seller a new Chanel handbag on the spot, I couldn’t believe it, wouldn’t Chanel
Investigate this matter. How did this super fake get to Chanel store, why are they not checking the bags when a customer returns it. To this day im still waiting on a call from Chanel as I think the seller is doing the same
Scam as in the article above.
How do we know we are buying authentic bags from the retailers like Chanel.

This is insane. I buy luxury handbags for use and for investment but not to get a refund by returning a counterfeit handbag to a luxury store. I am sure justice will be done righteously in her case.