Last week, one of our favorite Italian luxury brands filed a lawsuit against Forever 21. The reason? Gucci has accused the fast-fashion giant of stealing their iconic “blue-red-blue” and “green-red-green” stripes!

“Gucci America brings these counterclaims because Forever 21 has challenged its most valuable and widely known marks,” indicates a copy of the filing, according to BoF. “And further because Forever 21’s legal assault, like its business model, is built on undermining the very notion of trademark protection, which is of critical importance to Gucci America’s brand.”

Apparently, this is just the latest move by Gucci to challenge Forever 21. It’s the culmination of multiple cease-and-desist letters the Italian house sent Forever 21 over the retailer’s use of Gucci’s colored stripes on several pieces. These include a green tiger jumper, a silver bomber jacket, a choker, and a floral bomber jacket, pictured below.

Before Gucci took action, Forever 21 filed a case in June in the US District Court, preemptively seeking protection against trademark litigation threats.

In its complaint, the popular fast-fashion retailer said Gucci “should not be allowed to claim that Gucci, alone, has a monopoly on all blue-red-blue and green-red-green striped clothing and accessory items… Any use of stripes or color bands on clothing sold by Forever 21 is ornamental, decorative and aesthetically functional.”

Of course, Gucci is having a remarkably successful year and is at the height of its popularity—it’s the top luxury brand of Q2! (Read: What Were The Top Luxury Brands For Q2?) It’s no surprise that a fast-fashion retailer might want to ride on the tails of its success. In order for Gucci to win, they have to prove that it’s highly possible that a consumer might mistake Forever 21’s merchandise for Gucci products. (The consumer might believe, for example, that the pieces are part of a collaboration between the brands.)

This isn’t the first time Forever 21 has gotten into trouble over trademark infringement. Other brands that have sued include Adidas, Diana Von Furstenburg, Anna Sui, Anthropologie, and Puma.

As BoF has pointed out, the entire situation is pretty ironic as Gucci’s creative director, Alessandro Michele, has famously made ironic references to counterfeit culture in his own designs, with words like “Guccy” and “Guccify Yourself” on Gucci logo sweaters and t-shirts.

What are your thoughts? Where is the line between inspiration and downright stealing? Do you think Gucci is in the right here, or is there more room for creative license? Let us know in the comments!

Photo courtesy: The Business of Fashion 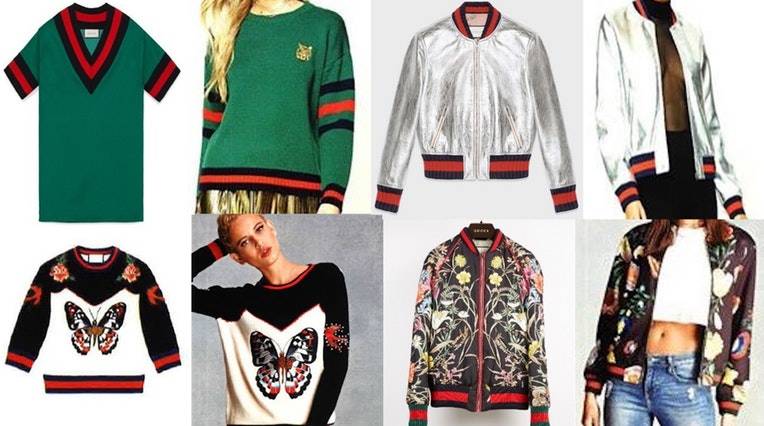