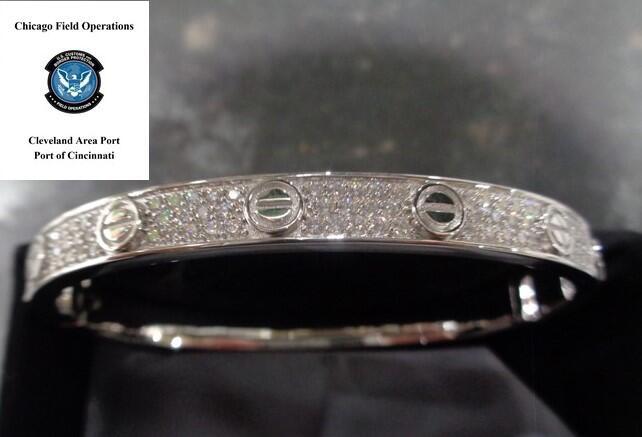 Here’s hoping your Mother’s Day gifts were purchased from “legitimate retailers.” At least, that’s the distinction and advice from the U.S. Customs and Border Protection (CBP) after it seized multiple shipments in April of fake items purportedly by Hermès, Dior, Louis Vuitton, and others.

On April 25, CBP officers discovered a substantial number of counterfeit handbags in two shipments from China and the Philippines, on their way to separate residents in California. The faked bags included those purporting to be Hermès, Louis Vuitton, Gucci, Dior, and Goyard. If real, the value would have been over $165,000.
At other points in April, CBP in Cincinnati, Ohio, alone discovered a counterfeit Cartier Love bracelet, which if real is valued around $47,000, nearly $14,000 worth of Dior sandals, and more. Earlier in April, CBP officers seized a shipment with two large “Hermès” tea sets, which if real would retail for about $4,000 each.
According to CBP, for its fiscal year 2021, handbags and wallets were the second largest group of seized products (apparel and accessories were number one) with an estimated value over $972 million. This represents 29% of the total value of counterfeit goods seized.
CBP continues to remind that fake goods can lead to real dangers.  According to CBP, The dangers of buying counterfeit products aren’t always obvious. There are economic impacts, legal implications, and health and safety risks that are important for you to know before you buy. Particularly, when shopping online, beware of counterfeit goods.  Fake goods can lead to real dangers. The Truth Behind Counterfeits.
Read more:
CBP: Buy Mom the Real Deal for Mother’s Day
Intellectual Property Rights Fiscal Year 2021 Seizure Statistics
News Cartier   dior    Gucci   Hermes   louisvuitton
Back to BopTalk
Share
Your Reply

Don’t pass up the opportunity to visit our page and find what you’re looking for with a single click!
https://kexing-chemical.com/product/activated-alumina/