Part I:
Hermes Fabourg, the flagship store and the heaven of every Hermes addict, at least they say. The store had two main entrances and while we lined up at the second door from 9:15, people from the first door were allowed to enter at 10:30 and it wasn’t until at least 10:45 till we were able to walk in the store. We were asked to line up inside the store again, we queued up to get an appointment timing. Being 4 ladies, we took 4 appointment timings different but around the same time at 1:55 mine was initially. We browsed the store, the shoe section and bought 4 pairs of shoes while we waited. The store is big, photography isn’t allowed and it was crowded. The closer our appointment timings got, the more they were delayed. Mine was delayed till 3:15, so we decided to walk across the street and have lunch at a neighboring restaurant named “bread and roses” which is of French cuisine. Going back to the store, I was SMSed the name of my sales assistant and where to meet her. My sales assistant was not as welcoming as I expected, I excused her being 4:00 pm already and with all the crowd. She asked what was I looking for and I precisely specified I would like a Birkin in a dark color, no specific hardware or leather. I said I prefer size 30 but I’m fine with a 25 or a 35 as long as it’s a Birkin. She asked what other bags should she get me I said a 4th option is a Kelly 28 and she insisted on me to choose another bag so I said a pochette. She left for around 10 minutes and came back with a little box, she took me to the private room and revealed it. Blue paon swift leather with palladium hardware, color is new from the season ss16. I asked if I can still get a Birkin and she said she didn’t have anything. I heard her speaking in the phone in French mentioning the pochette she offered me and the word “familia”. I know that Hermes sells only one bag per household but this was far from what I originally wanted. I asked if I can still buy a Birkin any other day, she said if I got the pochette I wouldn’t be able to buy a Birkin of any member from the Kelly family (kelly, pochette or Kelly cut) for 6 months in advance. I decided to get it since it was a very long wait either ways. On my way to the cashier I asked for a herbag, mini evelyne, bolide in a small size, jypsiere in a small size but I was told she doesn’t have any. I lined up at the cashier to pay and get my tax refund. I wasn’t very happy with what I scored at first but I think I’m starting to like the bag. My sister was offered a black pochette and my second sister was offered a red pochette, when she asked if she can get a dark or more neutral color, her SA said “your sister already got a black one” as an excuse they can’t offer her any “better” color.
We left the store around 5:30 with six Hermes orange bags in total and my mother, offered a Kelly cut, decided to skip it and come again for her dream bag. 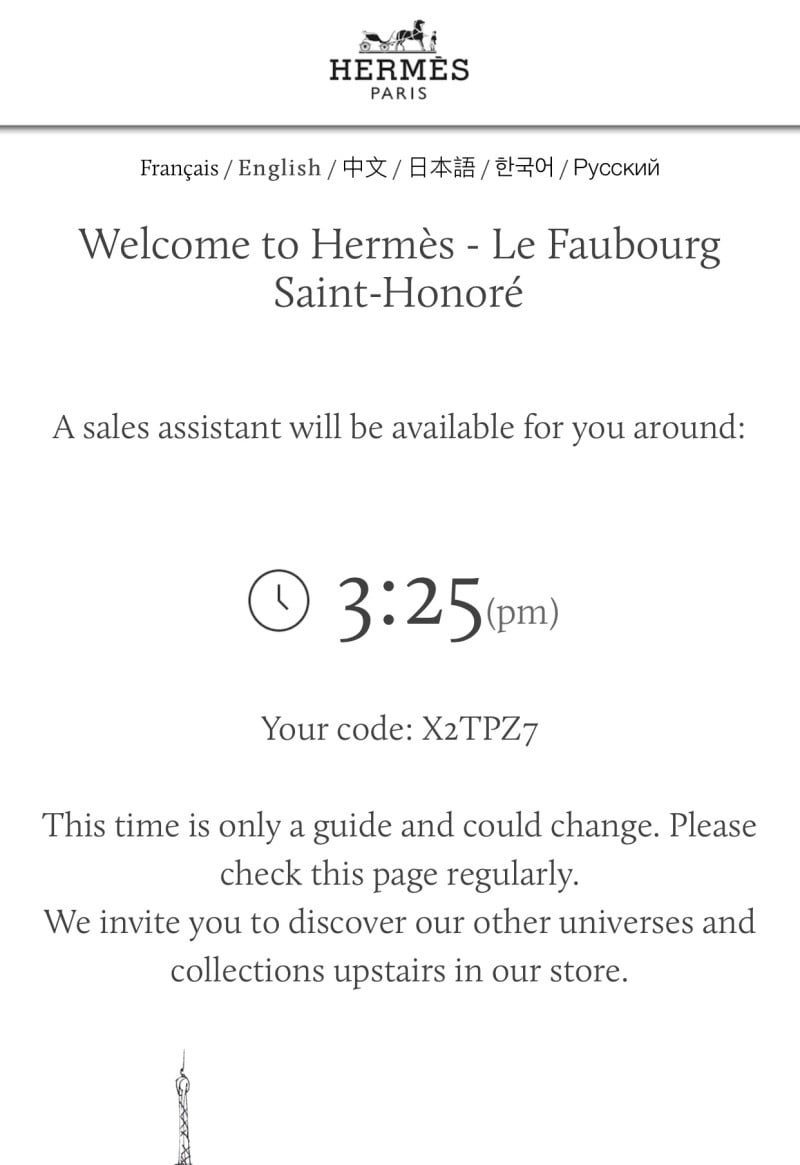 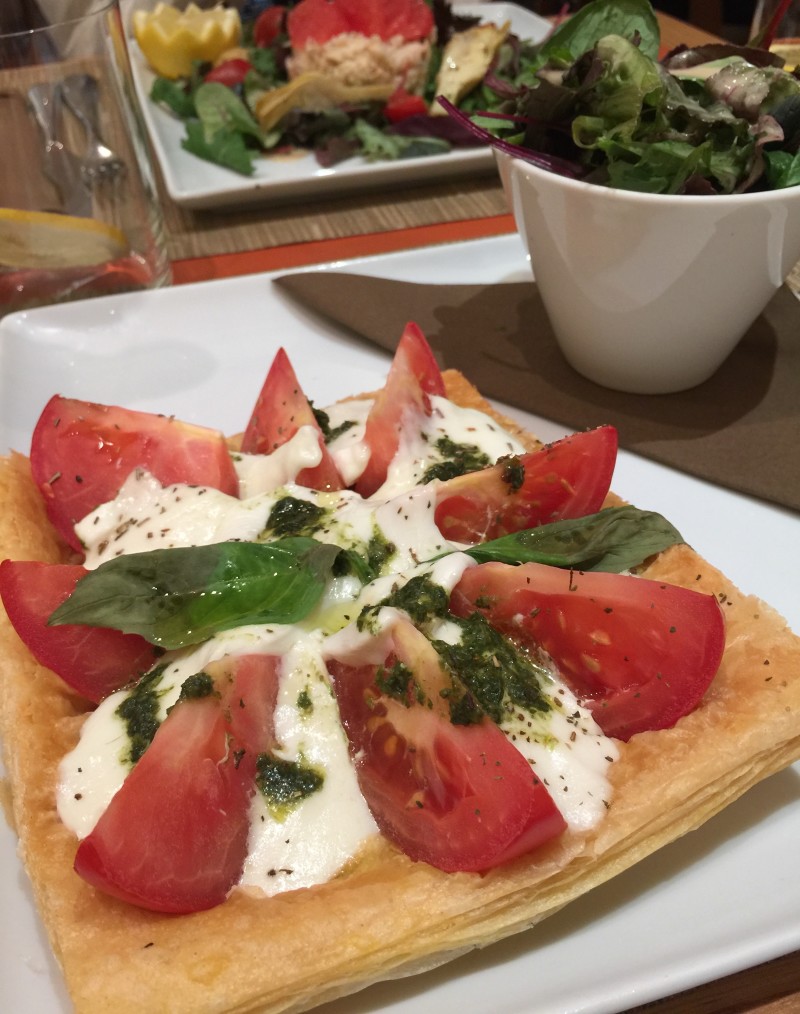 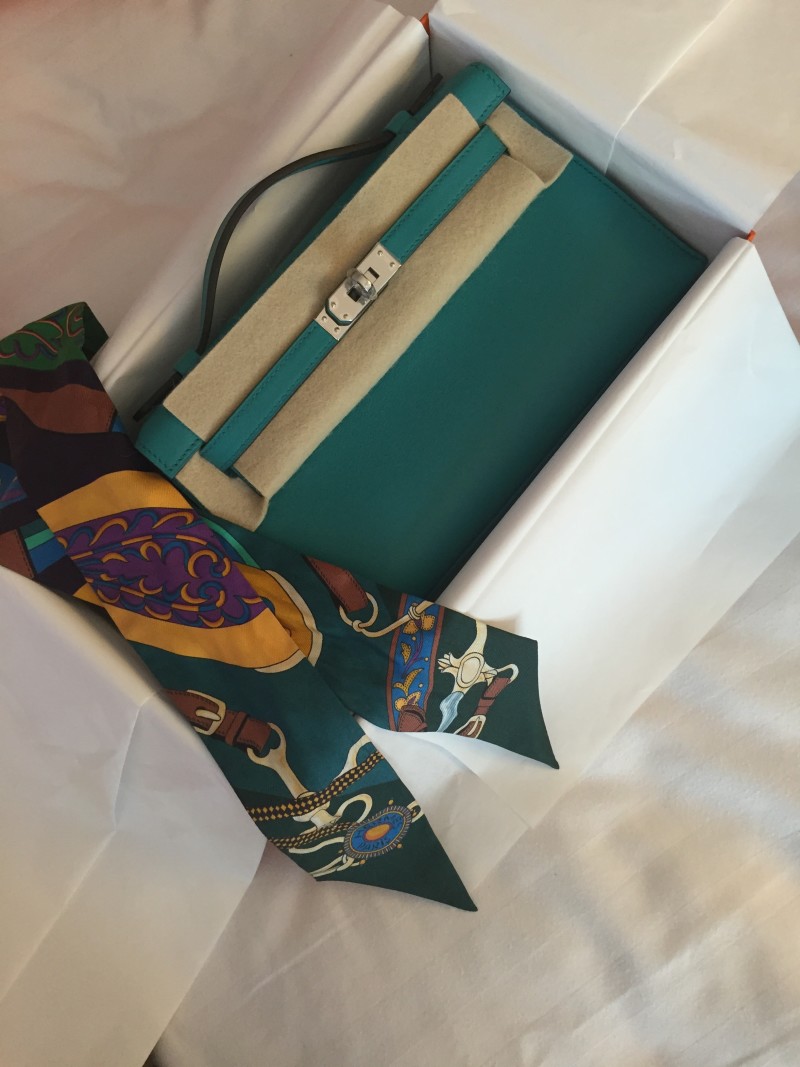 Thanks so much for your reply! Yes we would love to see them if you don’t mind.
So when you arrive at the store you get in line to receive an appt time? So the Hermes sales representative collects only your contact info at this point? Are any other questions asked of you?
I wonder how international clients handle this as many do not opt for service while traveling. Do you know if they have any other system also?

So excited for you!!! Amazing that you scored at FSH – many do not; including me who frequents that store and hubs speaks perfect French, haha! Paon is truly a fabulous color like PurseBop says!! That store can be frustrating for sure but keep at it!! ????

Are all flagship stores like this? I’m going to the one in miami and would like to know if they follow the same routine. thanks, s

Firstly congratulations on your score! Blue Paon is a lovely color 🙂 I’m so glad you didn’t leave it behind.
I scored my jypsiere in the same color/hardware at FSH in January.
Secondly I am eager to learn more about this new process of appt times. Could you elaborate for me.
So you start by queuing to get an appt. time and they give you this piece of paper or they text it to you. How do you check updated appt times?
Just so eager to understand so I can share with all our readers. I am going to share your thread with our readers on IG and with a newsletter. I hope that is ok! I can wait for you to perhaps fill in specific details. I cannot thank you enough for sharing. So excited.
Love PurseBop
XO