No Travel, No Problem! Louis Vuitton’s Skyscraper Jackets Have You Covered

If there’s one thing Virgil Abloh has become known for as artistic director of menswear at Louis Vuitton, it’s his outlandish designs which push the boundaries of normality. His collections for the house routinely shock yet delight the fashion crowd and his menswear collection for fall/winter 2021 has proved no different.

Abloh recreated some of the world’s most famous skylines in the form of 3D puffer jackets. The designer debuted two of these skyline puffer jackets for his latest collection for LV, shown at the Tennis Club de Paris in Paris and live streamed throughout the globe. One, aptly named the Paris Skyline Puffer, incorporates French’s signature landmarks, including the Louvre, Arc de Triomphe, Notre Dame Cathedral and Eiffel Tower. The latter rested on the shoulder of the jacket while the famous Louvre, so often the site of fashion extravaganzas, hung off the edge of the jacket’s hem. Another style, the New York City Skyline Puffer, features a collection of skyscrapers from New York City. Abloh also paid homage to his roots by featuring some famous buildings from his hometown of Chicago in the design.

Far from a wacky makeshift design and unwarranted eccentricity, the designs are more paper mache chic. And, of course, these over the top looks from Abloh have heart and meaning behind them.

The collection deconstructs traditional gender norms, a common theme throughout Abloh’s work for the house since he began in 2018. With the collection, Abloh explores what it means to be a cultural outsider, how clothing informs our preconceived judgments and how it can subsequently be used to challenge them.

“With his new Louis Vuitton collection, Virgil Abloh employs fashion as a tool to change predetermined perceptions of dress codes”, Louis Vuitton said of the show.

The design of each jacket makes the figure wearing it the centre of the new area which links to the collection’s aim of “re-appropriating the normal through extreme elevation”.

As always with Abloh, the unorthodox and unrealistic design of the jackets is no accident. He wanted to experiment with optical illusion and replicating the familiar.

This isn’t the first time Abloh has incorporated avant-garde and cumbersome structures into his collections. His spring/summer 2020 menswear show for the house saw one model walk down the runway clad in a plethora of monogrammed accessories including a large rectangular oblong structure carried on the model’s back.

The possibility of far off travel this summer may be slim but one thing is for sure – we’re crushing over these landmark skyline puffers. If you can’t jet off to Paris for a summer of French détendez-vous or head off to NYC to see the sights, this may just be the next best thing! 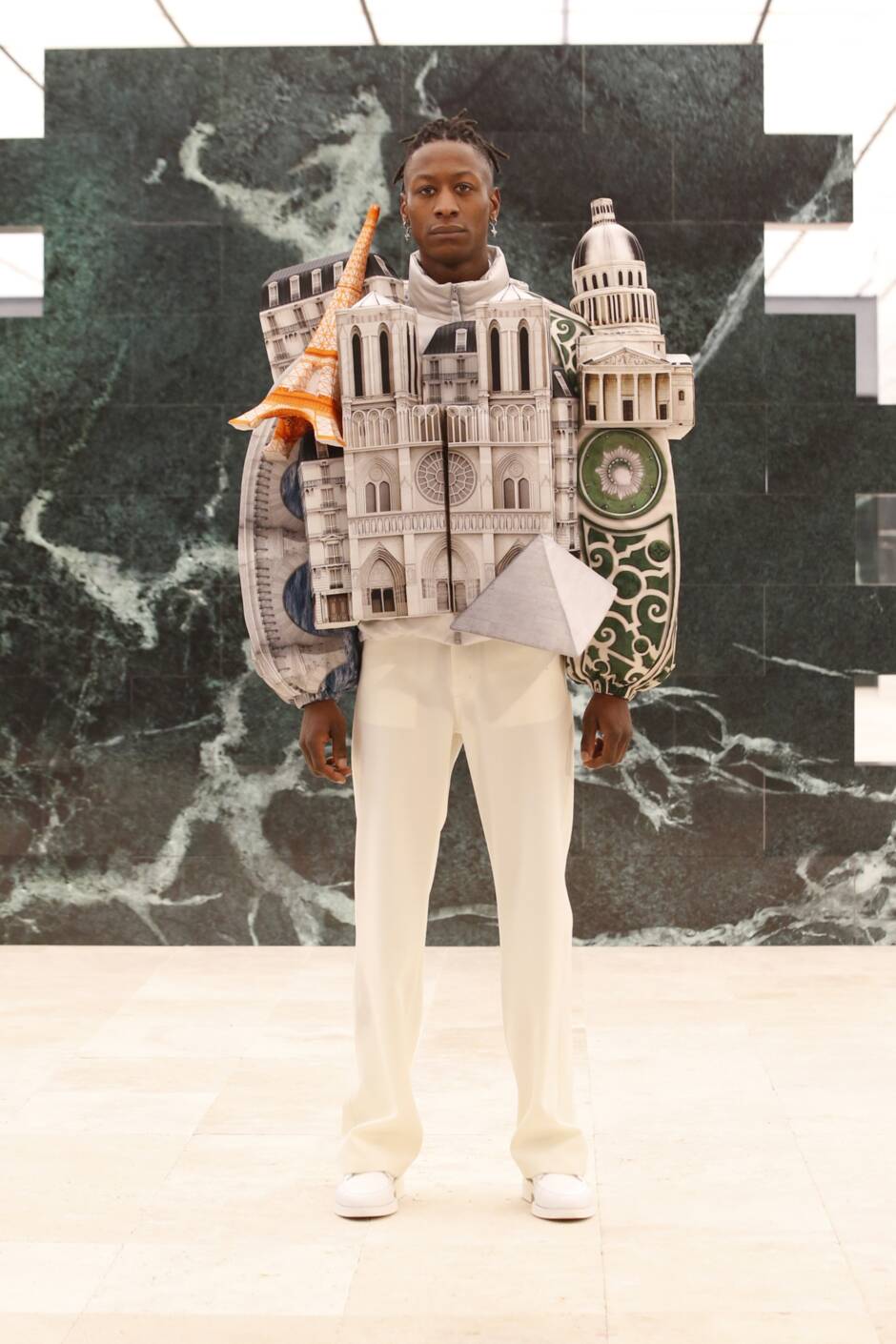 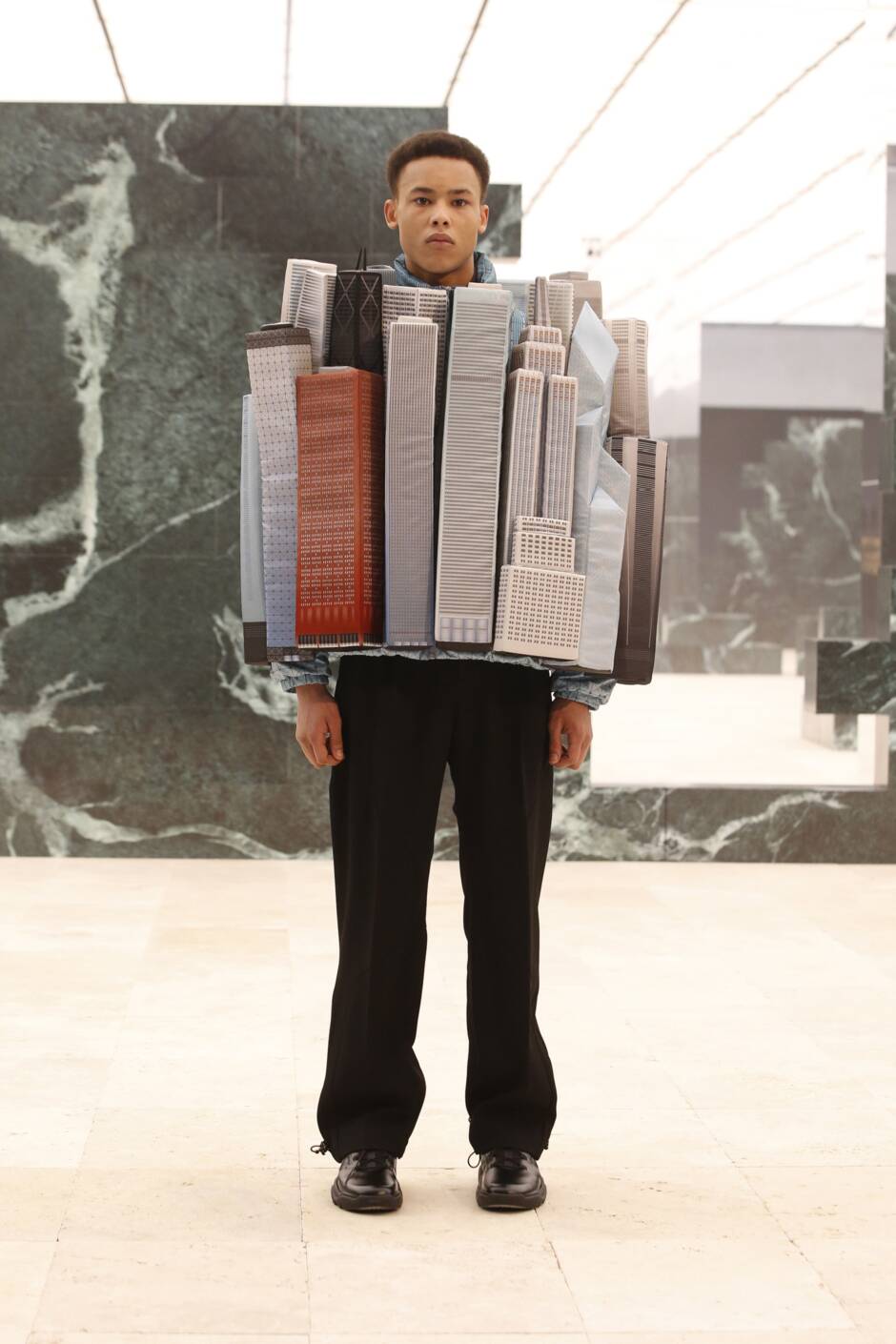 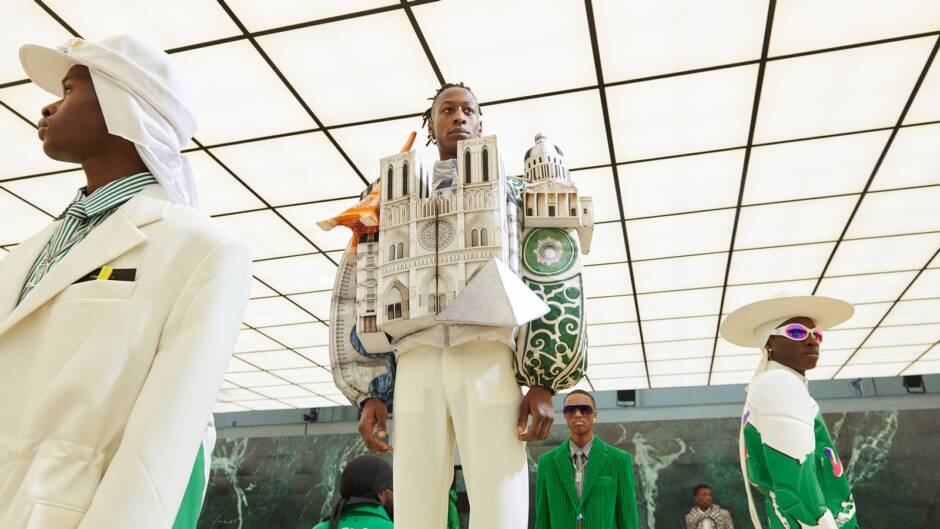