Is Chanel Losing Ground to Dior?

Lockdown has proven to be one of the most challenging financial landscapes to mitigate for businesses across the globe. With long term store closures, it became imperative for companies to take to online retail in order to maintain sales and financial targets. In fact, almost every luxury brand can credit its digital sales as a foremost contributor to surviving peak pandemic deficits. Almost every brand. The holdout, of course, is Chanel. 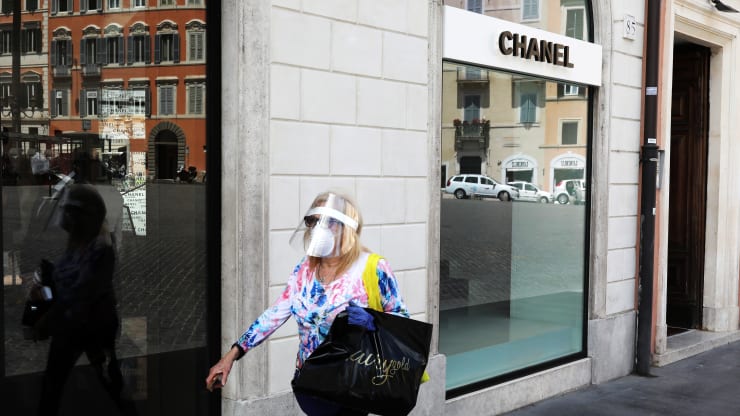 Despite the varying degree to which luxury houses make available their product offerings online, Chanel is one that, with some exceptions, has opted out. For sales, Chanel promotes an exclusively in-store shopping experience, despite modernizing and growing its digital presence. It’s not to say that the iconic house has zero online presence. In fact, you can still purchase some Chanel products like makeup and perfume online. Moreover, Chanel’s website has flourished into an interactive destination for haute couturiers and fashion lovers alike- frequently displaying runway and campaign videos on its main portal. However, the most popular and in demand products like handbags, ready-to-wear, and small leather goods, may only be purchased in person in boutiques.

Instead of succumbing to the norm that is e-commerce, Chanel focuses on maintaining the pristine customer experience that it has come to be associated with – something that cannot be replicated through online shopping.

Today, e-commerce is a few clicks and products are flat on a screen, there is no experience… this experience is not at the level of what we want to offer our clients 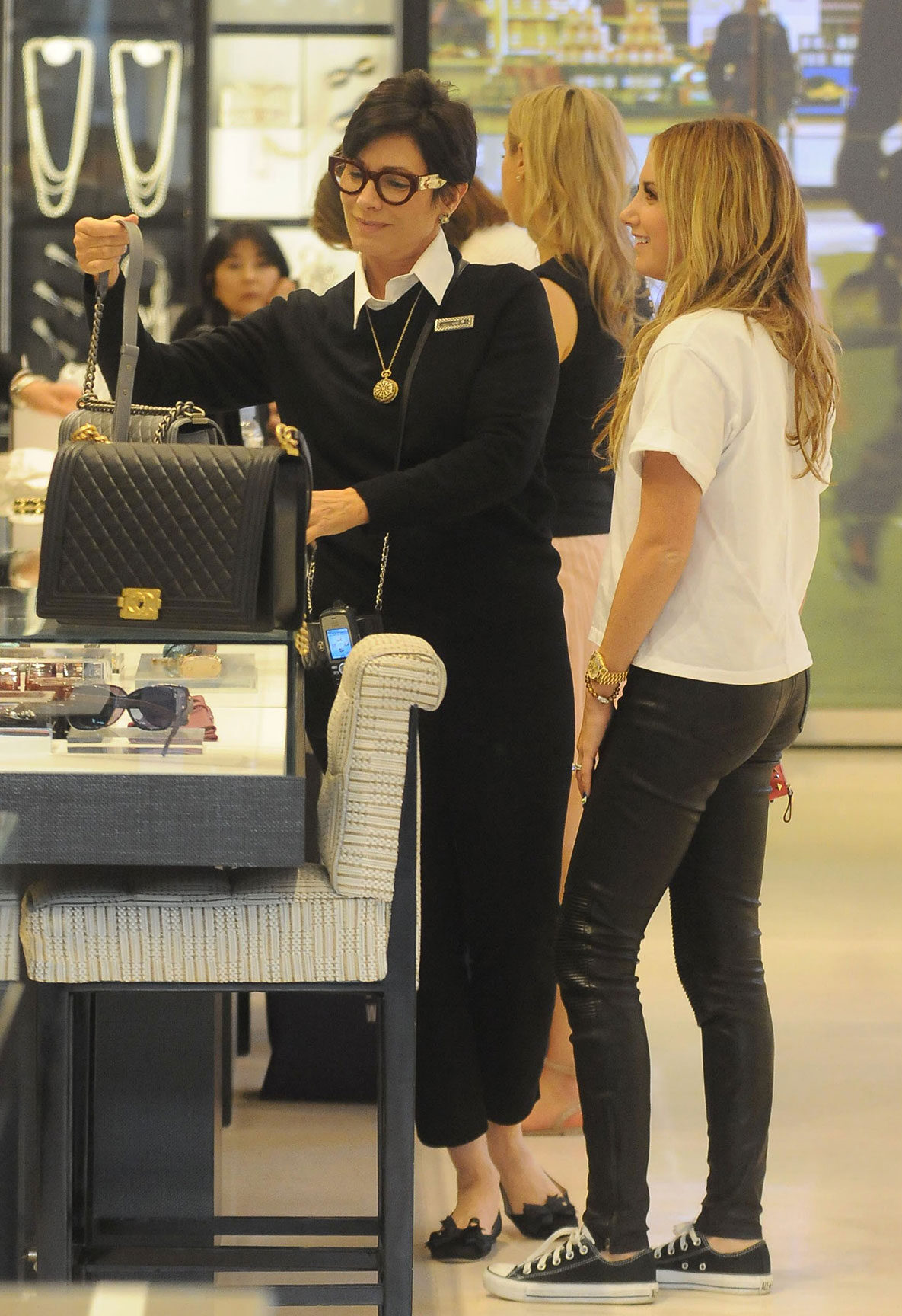 In knowing that its customer experience is what propels the brand to its renowned status, Chanel chose a hybrid approach to sales during the pandemic. By way of a tailored concierge service, the house provided door-to-door delivery. Additionally, Chanel made its in-store teams more accessible through social media, where they were able to actively accept and process orders.

There are alternatives to e-commerce. Pure e-commerce is not an end per se. Service is much more important.

Furthermore, and one could argue it is part of the experience approach, Chanel is pursuing exclusivity – much like Hermès. Exclusivity, or the illusion of it, is one of the sole determinants to many aspects of the business, from pricing to commercial appeal. The concept of being an atelier that services the needs of a few, with items only a select number of people can purchase, is not only a genius marketing tactic, but an ideal that many individuals strive for. This is a winning strategy, one that consistently keeps Chanel not only relevant, but desirable.

Chanel’s business strategy has positively contributed to the brand’s success over the past decade. The 2020 Vogue Business Index noted that “Chanel continues to be a byword for luxury and the most recognized brand by global luxury consumers.” 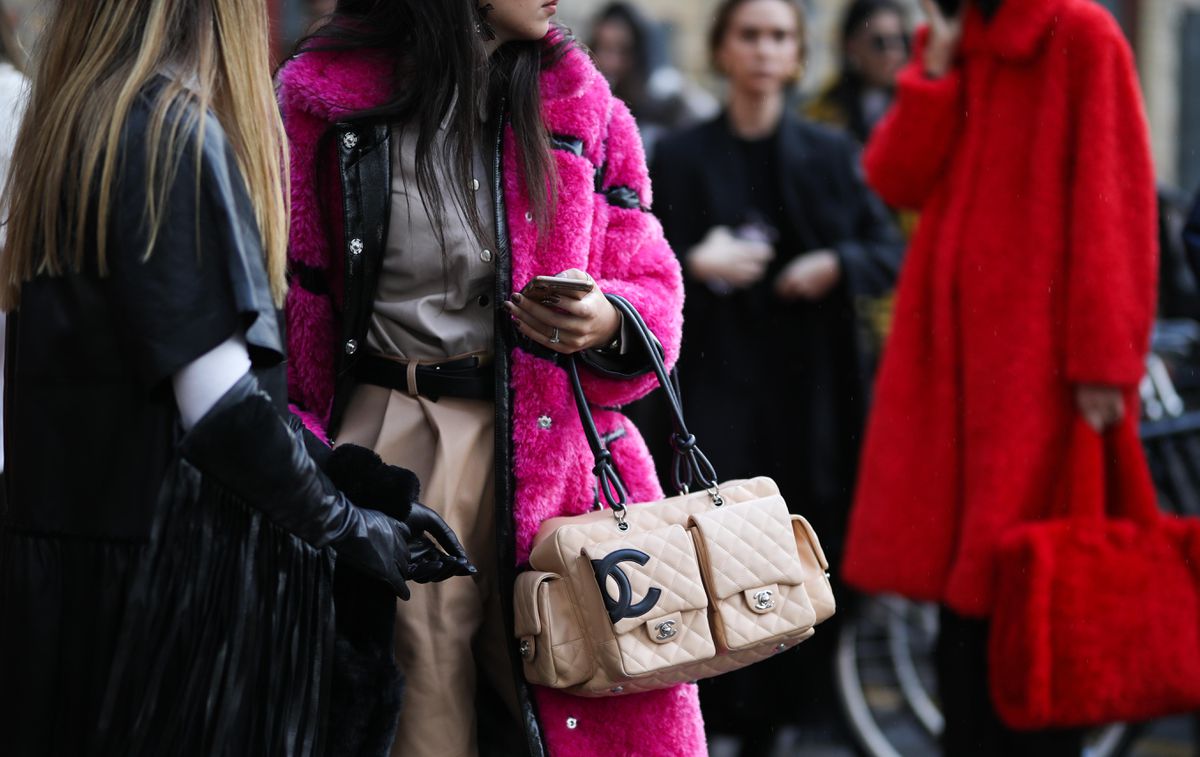 Despite Chanel’s reputation, during the pandemic, Google searches for the luxury brand dropped. Moreover, searches for Dior rose. True, Dior has been on fire under the new-ish designer Maria Grazia Chiuri, with a steady train of new designs and re-takes on popular past products. However, over the last five years, Dior consistently lagged behind Chanel in worldwide Google Searches. Nevertheless, during the pandemic, Dior consistently closed the gap with the house. At one point, Dior even briefly surpassed Chanel in google searches.

Does this mean Dior is close to overtaking Chanel in terms of popularity (if Google searches are such an indicator)? That is one way of looking at it. It can be reasonably deduced that increased interest, demand and brand popularity, are key drivers of social media allure and search engine hits. 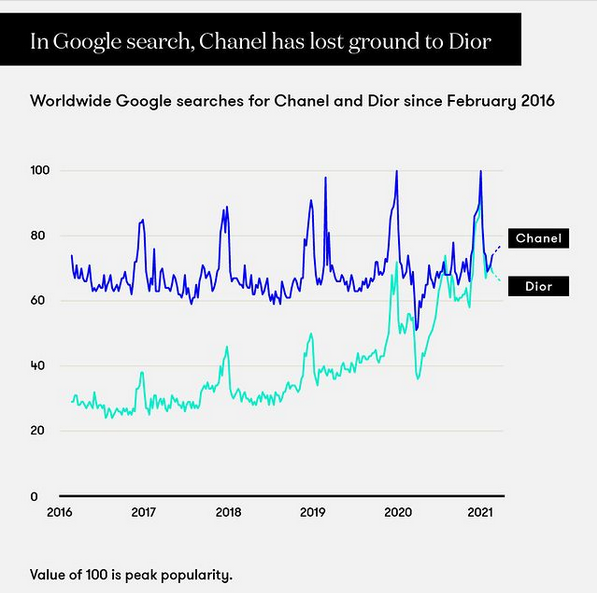 On the other hand, could searches be reflective of shoppers’ realization that, with stores closed, buying Chanel was a virtual impossibility. In other words, is Chanel missing the boat when it comes to its digital strategy? Or could Chanel buyers simply be migrating to Dior as a form of temporary fulfillment? Are consumers swaying to them during this time for the sole reason that their first choice is inaccessible? 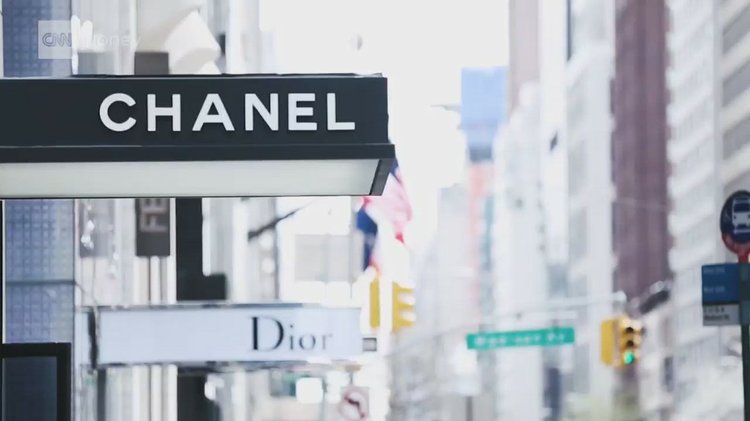 Looking at Chanel’s overall strategy. The privately held company has always been one to play the long game rather than focus on short term margins, quite frankly, because they can. The luxuries that come with being the most recognized prestige brand in the world is the loyalty of its consumer base. “I suspect that Chanel will have proven to be the most resilient of companies,” thinks Erwan Rambourg, managing director at HSBC. “The price point of Chanel is significantly higher so you are looking at consumers who are resilient in tough times.” Similar to Hermes, the level of price elasticity when it comes to Chanel is fairly low, meaning consumer reaction to price changes is minimal. Confident in the loyalty of its base, Chanel is able to choose how exactly they access the market- their preference being differentiation over dilution.

Unlike other luxury brands, Chanel has chosen a different path upon which to establish its goals- the path of exclusivity and brand desirability.

We can see that Chanel does not want to be like any other brand. The concept of exclusivity, scarcity, desirability and customer experience are key justifiers behind its decision. So far it has worked. Why, then, the sudden “closing-of-the-gap” by Dior? And all the while, Chanel’s Spring/Summer 2021 collection is already massively successful, with never-ending waitlists across the world. An interesting point to consider is that this observation might be missing a key factor- China. 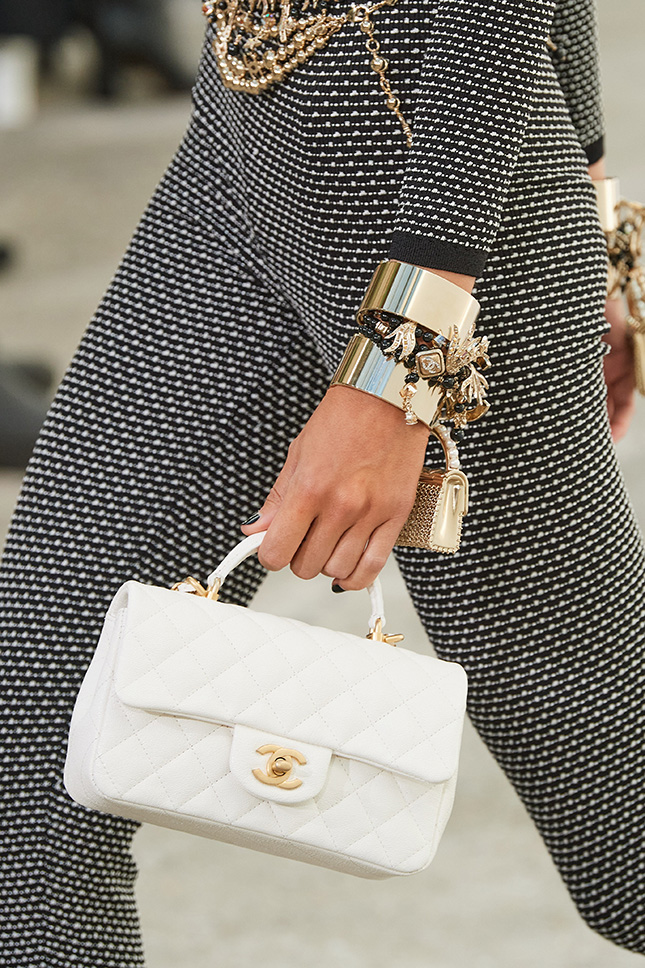 For years now, the most popular search engine in the world, Google, has been banned in China. A domestically cultivated alternative its main competitor in the region. Moreover, the Chinese luxury market holds one of largest shares of global sales. Can it be possible, then, that Dior’s seemingly rapid increase in searches is all smoke and mirrors? Without accounting for the world’s largest luxury consumer market, it is extremely possible. In fact, despite a decrease in sales during the pandemic in other regions, the Asian market sustained consistent growth, and even managed to increase its consumption figures during this time. Asian luxury consumers, prevented from international travel (like the rest of the world), shopped at home. “Chanel might have felt obliged to loosen its resistance to online fashion sales sooner were it not for its ongoing resilience in the APAC (Asia Pacific) region,” states Laure Guilbault of Vogue Business. 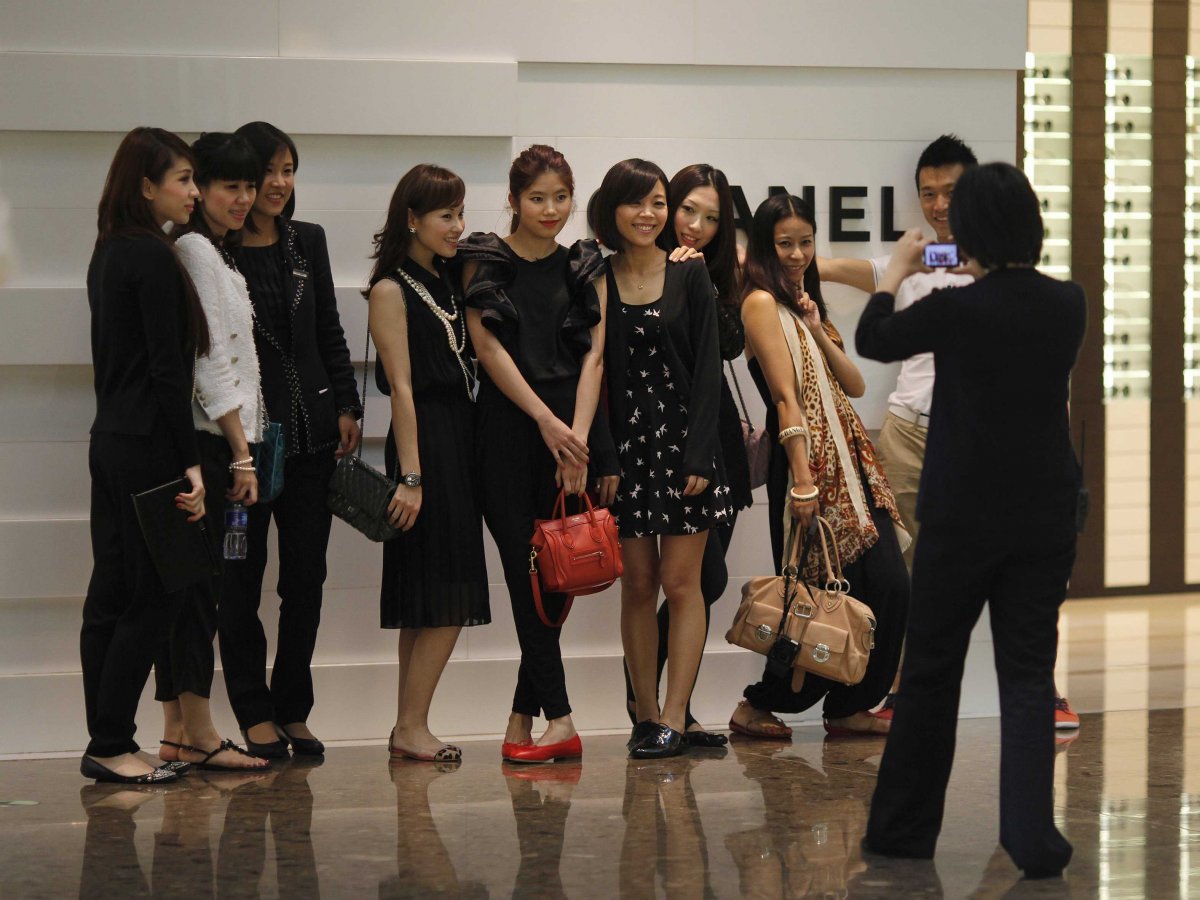 So, what does this all mean. Is Chanel really starting to lose ground to its competitors? The short answer- probably not, for now at least. With sellout collections throughout the year and the reintroduction of in-store shopping, the brand is booming in spite of its absence online. Simply put, we all still love Chanel, and even stranger yet, we all love how hard it is to get our hands on its items- the feeling of finally having one, unmatched. Chanel knows this, and in knowing this, is able to play on our emotions any which way they choose, whether online or in person. Will the brand eventually switch to e-commerce? Only time will tell. It is possible that the need may arise, but for now, our beloved classic flaps will only be found in one place…

If they didn’t sell online when the entire world was shut, they’re not going to start when the world reopens