This Is What the Queen Carries in Her Handbag

Queen Elizabeth II has a tried and true style she sticks to. Think tweed, hats and pearls. Her handbag is no exception to this rule: she can almost always be found with her iconic black bag by Launer, a British luxury designer. (And as we reported before, she even uses it to signal to her staff!)

Like many things royal, this bag is shrouded in mystery. What could she possibly keep inside? Royal biographer Sally Bedell Smith has the answers. In her classic biography Elizabeth the Queen: The Woman Behind the Throne, Bedell Smith gives us even more insight into Her Majesty’s trusty Launer companion. Apparently, the Queen keeps Clarins lipstick, a small mirror, a fountain pen, her reading glasses, and mint lozenges zipped up in her purse. And she’s nothing if not precise—she only carries cash—crisp fives and tens—in her handbag on Sundays, just for the offering at church.

But that’s not all—according to one of the Queen’s cousins, she also carries a portable hook with a suction cup when she leaves the palace. So if she needs to hang her bag up under a table, she’s covered. Perhaps we should all take this tip from Her Majesty herself…?

What’s in your bag? Any resemblance to the Queen’s? 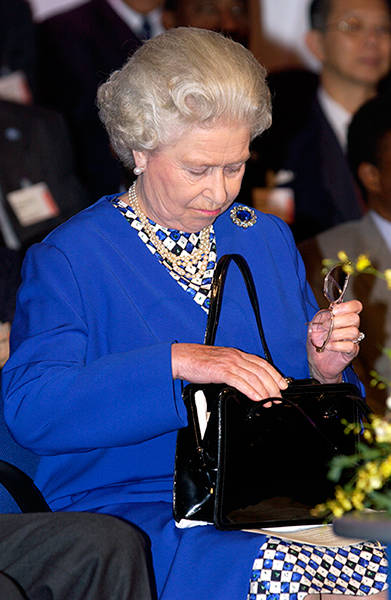