The Royal Wedding: A Fashionista Fairytale 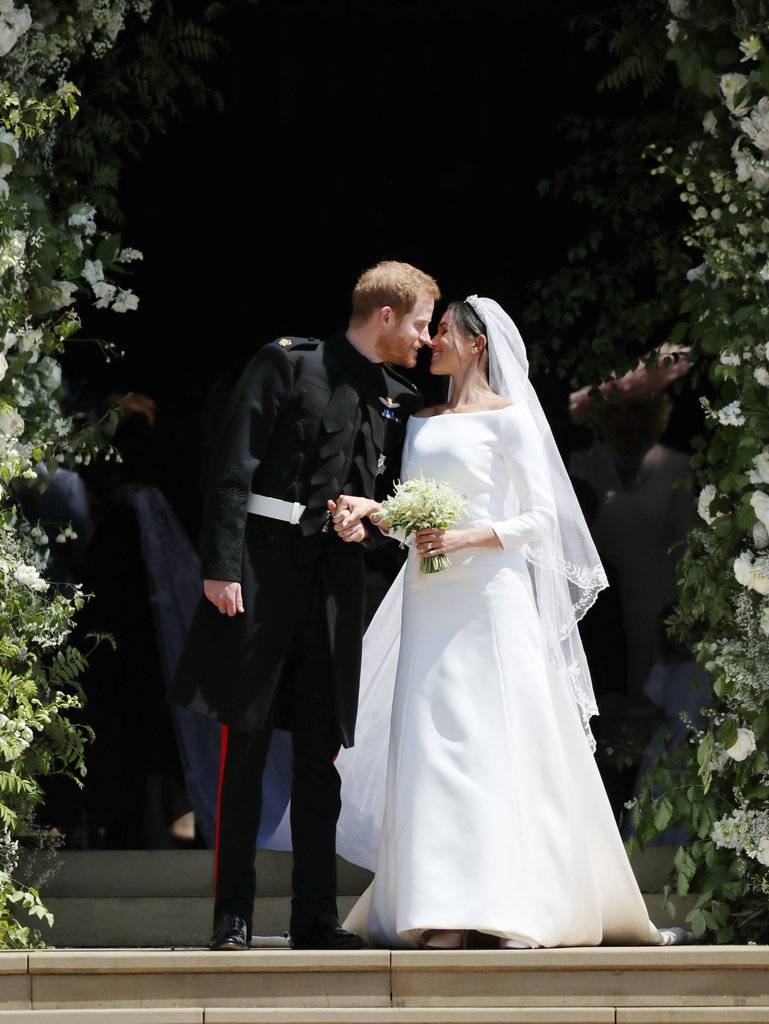 A Chronicle of the Royal Wedding by PurseBop’s London Correspondent

This weekend, we witnessed a fairytale come to life. Here in London, wisteria was blooming, the sun stood tall in the sky, and—as cliché as it may be—love was truly in the air. Just an hour away in Windsor Castle, Meghan Markle and Prince Harry were wed in a dreamy ceremony. In London, crowds rejoiced.

This is the first royal wedding that has taken place since I moved to England almost a year ago, and, I must admit, I wasn’t quite sure what to expect. Personally, I’ve always been enchanted by the members of the royal family—their quirks, traditions, sartorial customs. And as an American, I couldn’t help but silently root for the bold, LA-raised, Instagram-savvy Markle and her once-wayward ginger Prince. But how would the British take to her? And just how seriously, really, did Londoners take the wedding? Would the 19th of May be just another day in the city (though an uncharacteristically warm one), or something special indeed? Before this weekend, I could only speculate.

Then, Saturday came. Women in tailored dresses and pinned fascinators mingled in squares, cobbled streets, and manicured parks, champagne flutes in hand. Some walked around cheekily donning paper masks of members of the House of Windsor. “Did you see Meghan Markle’s dress?”, seemingly nonchalant passersby whispered to one another. Even those who professed disinterest in the royal affair couldn’t help but be captivated by the international love story.

It was a beautiful affair, one that was discussed late into the evening. Friends had long conversations about the unconventional nature of the sermon—”a breath of fresh air,” as some pronounced—as well as the seating arrangement, the intimate setting of the 14th-century Gothic chapel, and the facial expressions of the Queen throughout the ceremony. There was one topic, though, that we always came back to: the fashion. Any wedding can draw the attention of a fashionista. This one, as you’d suspect, had more pull than most. Follow along as I take you through the ins and out of the “fashionista fairytale” of the royal wedding, with insight from fashion-savvy Londoners along the way. 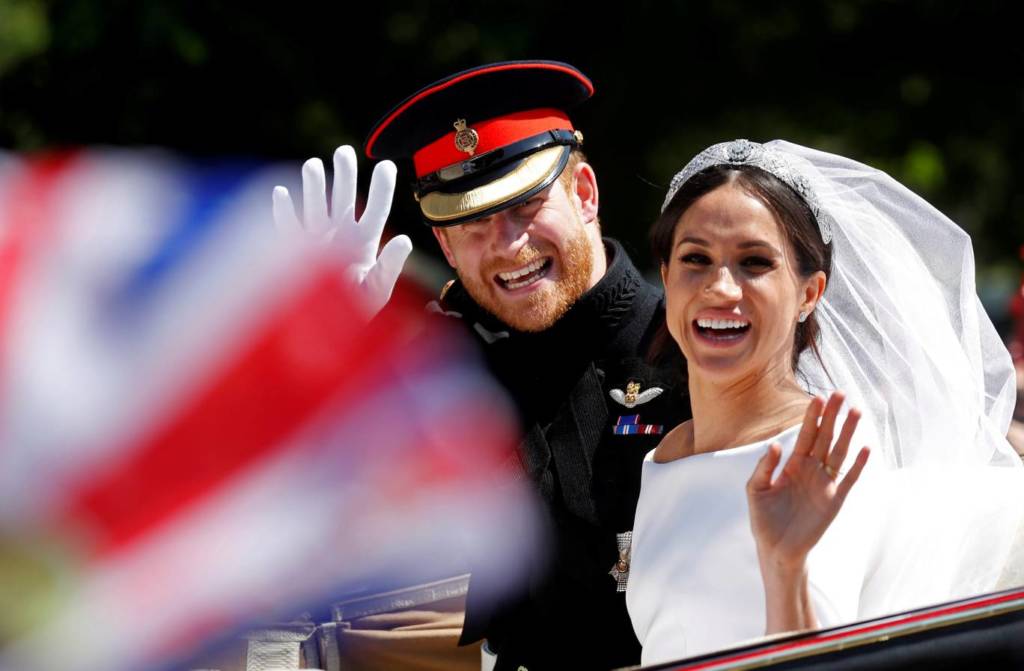 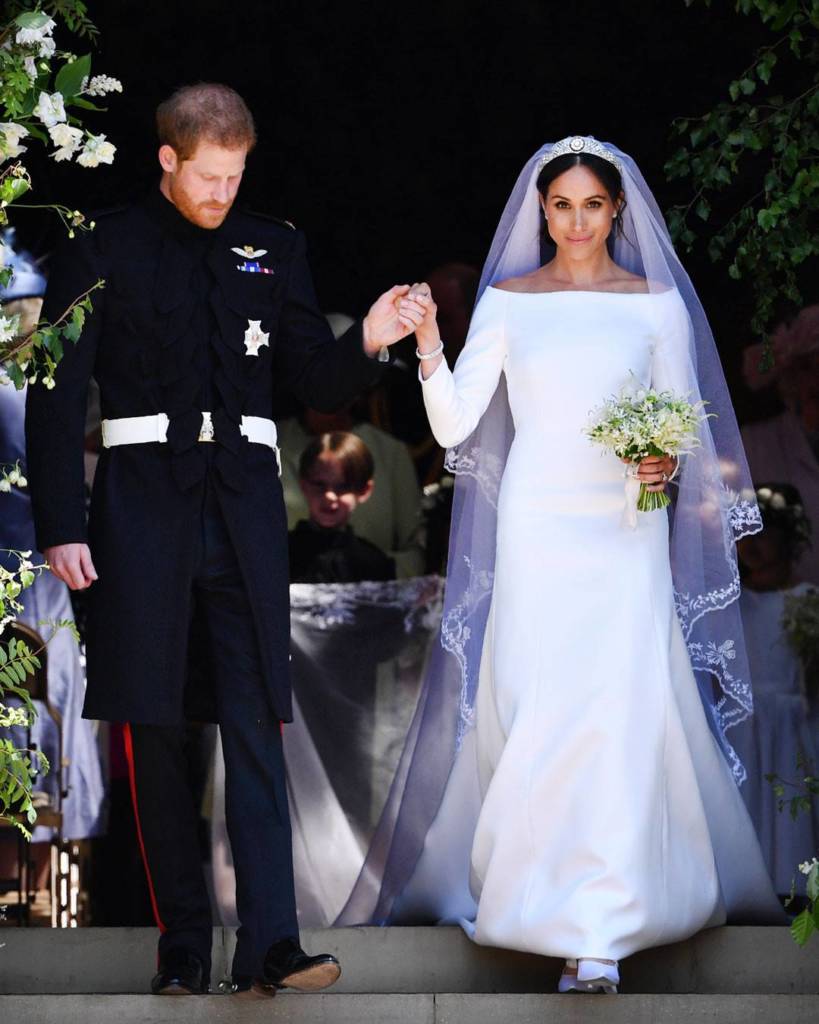 First thing’s first: Markle’s wedding dress was near-unanimously loved. The Givenchy gown, designed by the French maison’s first female artistic director, Clare Waight Keller, featured silk cady, a bateau neckline, three-quarter sleeves, and an underskirt in triple organza. Though the brand is French, the designer herself is English, which almost certainly influenced Markle’s decision to seek her out.

Although the veil incorporated intricate stitching—which includes tracings of the representative flowers for each of the Commonwealth countries—the dress itself had no embellishments. It was, instead, perfectly tailored with a structured train. Over the weekend, it was compared frequently with Kate’s Alexander McQueen dress from seven years ago. Both have been called the epitome of elegance, but aside from the long sleeves and royal settings, the pair of dresses couldn’t be more different. While a few of my London friends mentioned that they found the dress a bit too simple, the response was overwhelmingly positive.

I’m curious, though, to hear about reactions back across the pond (as well as in other parts of the globe). Was the dress similarly beloved? Or has the English taste for simplicity clouded judgement? 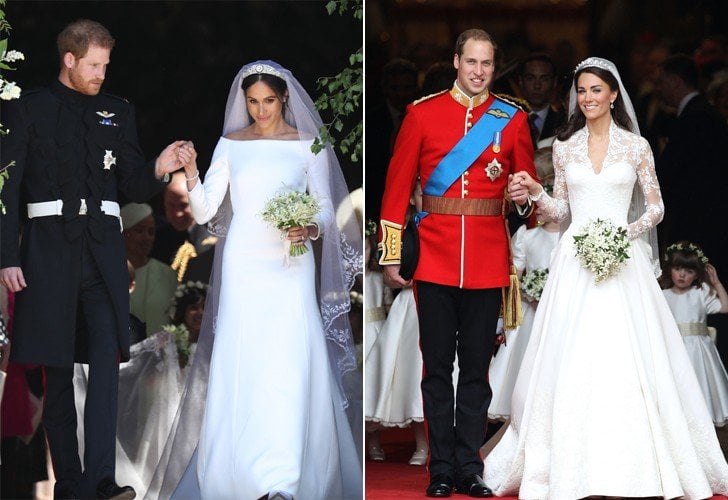 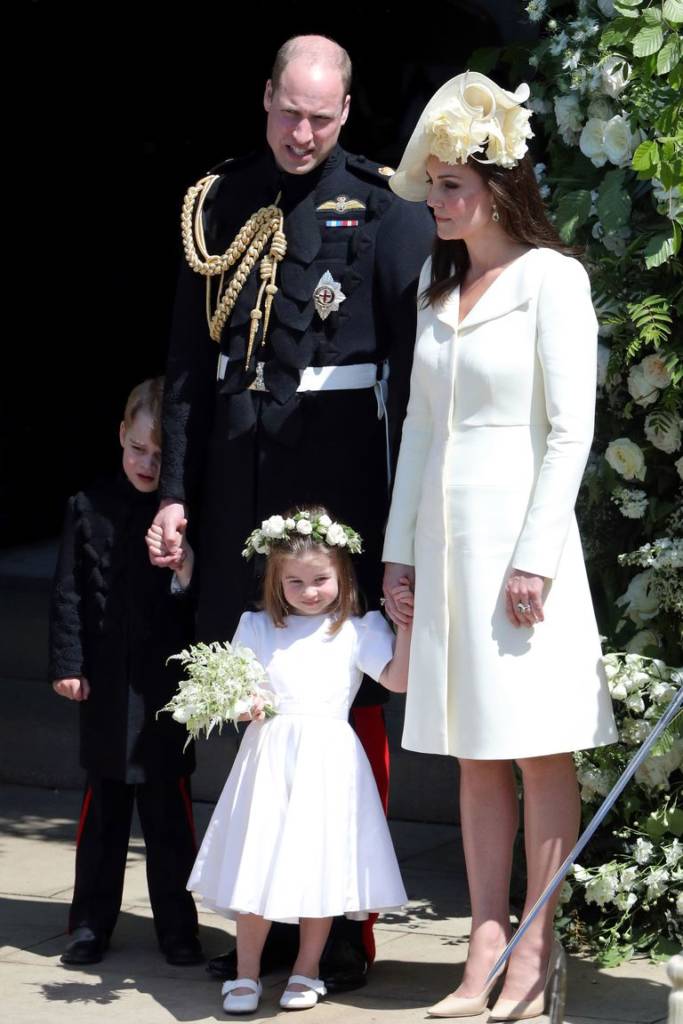 In the last royal wedding of the House of Windsor, all eyes were on Kate. Now, onlookers anxiously awaited her outfit for her brother-in-law’s event. What she wore was, in the end, a surprise to no one.

Just a month after Prince Louis’ birth, Kate emerged in a traditional pale yellow ensemble by Alexander McQueen, the designer of her wedding dress. She paired the conservative dress with Jimmy Choo pumps and a striking Philip Treacy hat, whose flowers lent an extra bit of excitement to the outfit. The dress itself embraced classic Kate style, and in fact had been worn twice before, to Charlotte’s christening and the Queen’s birthday.

The consensus here in London? While people found her ensemble—and especially the hat—pleasant, and appropriate for the occasion, they also seemed to consider it a bit uninspired on the whole. In recent months, much more attention has been paid to Markle’s sartorial decisions, and it seems that her power to influence fashion may continue to overshadow her sister-in-law’s. We’ll have to stay tuned. 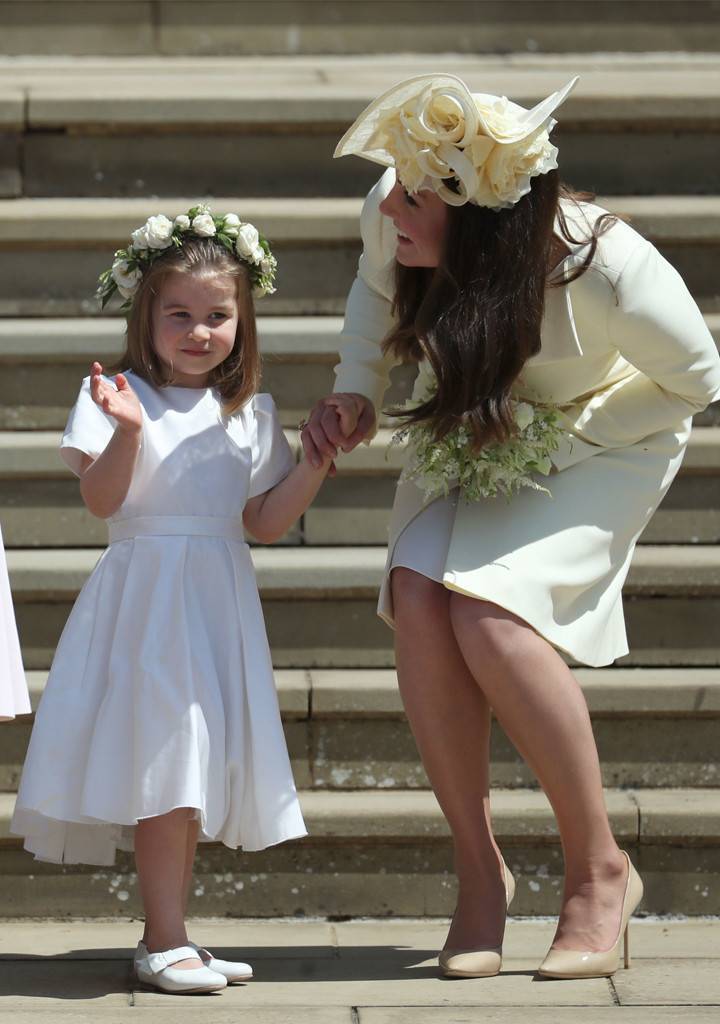 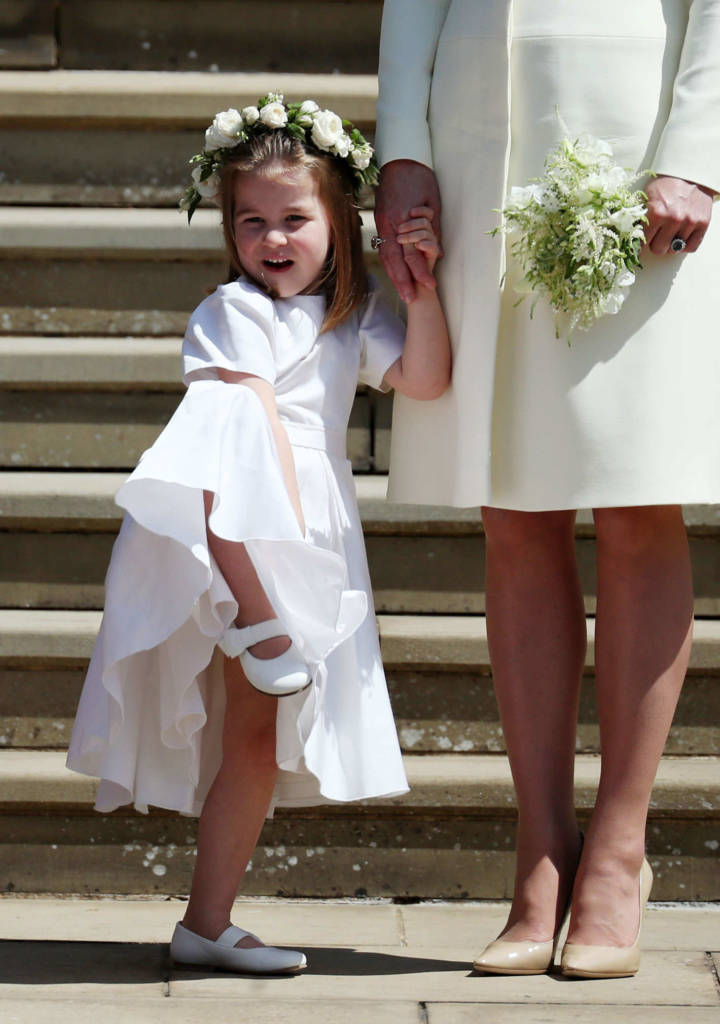 In London, we couldn’t get enough of the simply adorable outfits worn by Charlotte and her fellow bridesmaids. Like Markle’s wedding dress, they were designed by Givenchy. Crafted from ivory silk (don’t fear, white bridesmaid dresses are more commonplace in Britain!), they feature back-bows and full, pleated skirts.

People couldn’t stop cooing over the puff sleeves—and, of course, the sheer excitement on Charlotte’s face over the course of the afternoon. The head garlands or flowers were the cherry on top. Givenchy, little white shoes, and toddlers: what could be cuter? 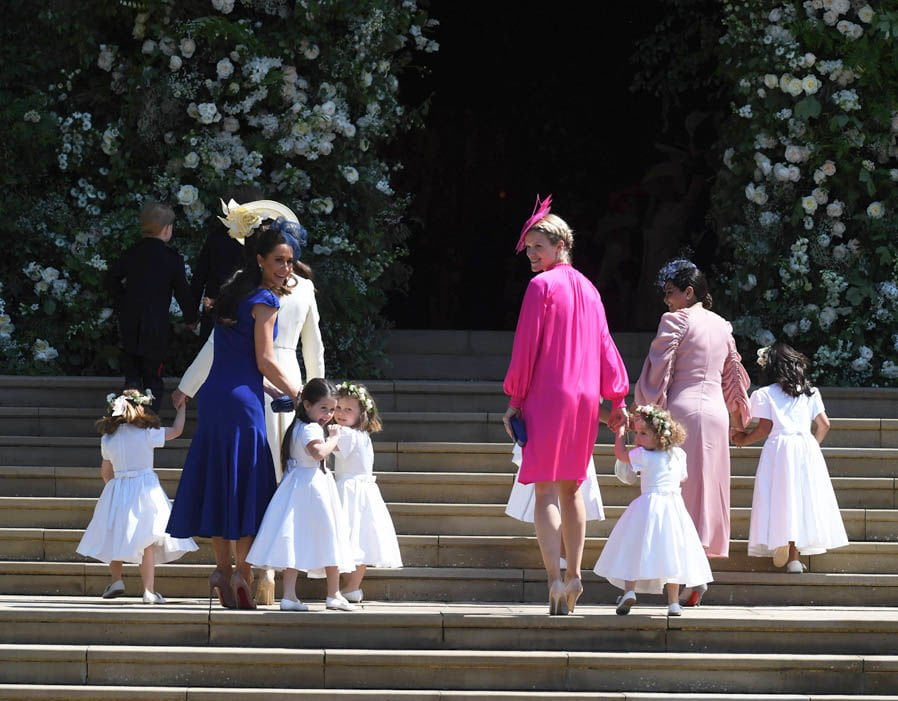 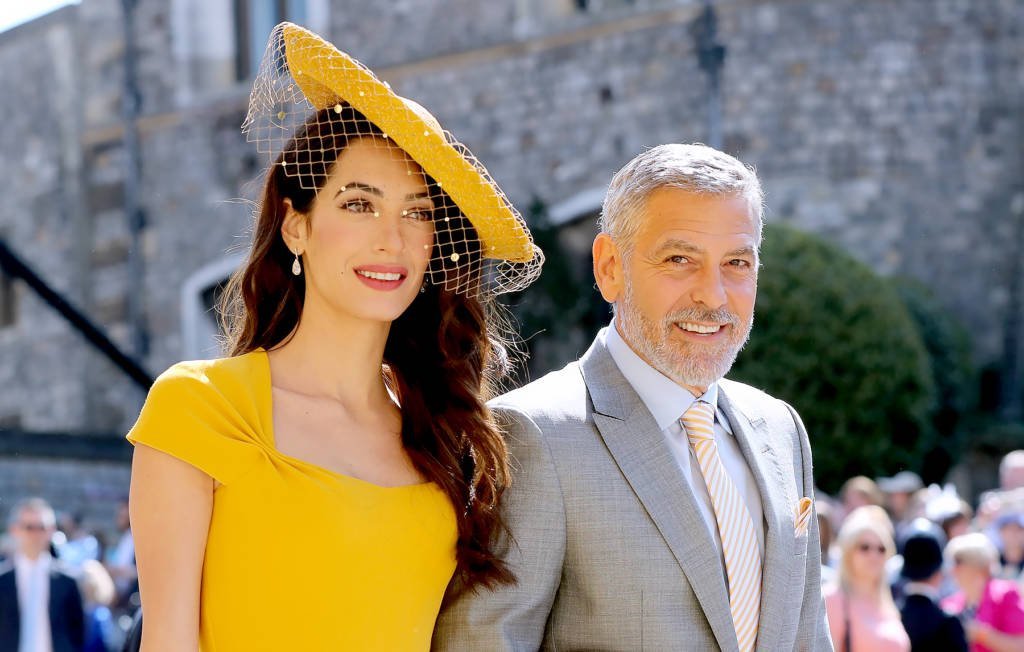 As you would expect, a number of celebrities attended the event, including Oprah, the Beckhams, Idris Elba, Fergie, and Carey Mulligan. Two, however, dominated the conversation: Amal Clooney and Serena Williams. Both women took the occasion to dress with elegance and jubilance—Clooney in a golden Stella McCartney dress and matching hat (and a husband with a color-coordinated tie), and Williams in a blush Versace dress and delicate fascinator.

While Clooney went for a romantic vibe to play down the bold color of her dress, with her locks in loose curls and delicate jewelry, Williams made a statement despite the neutral color of her dress by pulling her hair back dramatically and donning a chunky statement necklace. As Williams later revealed on Instagram, she traded her heels for sneakers at the evening reception. Both were hits over here. 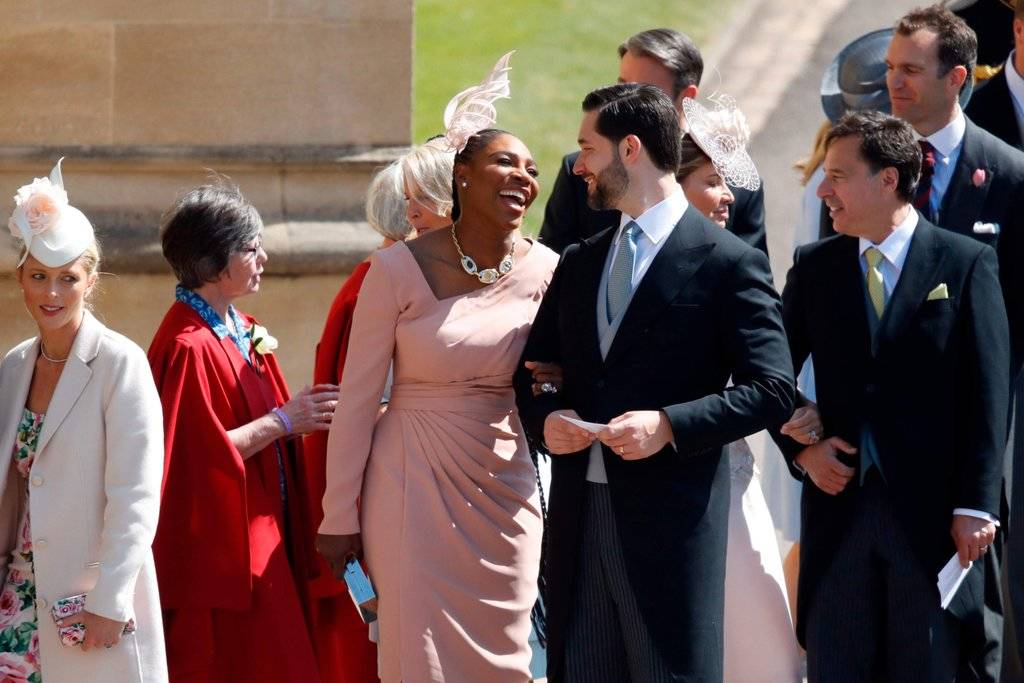 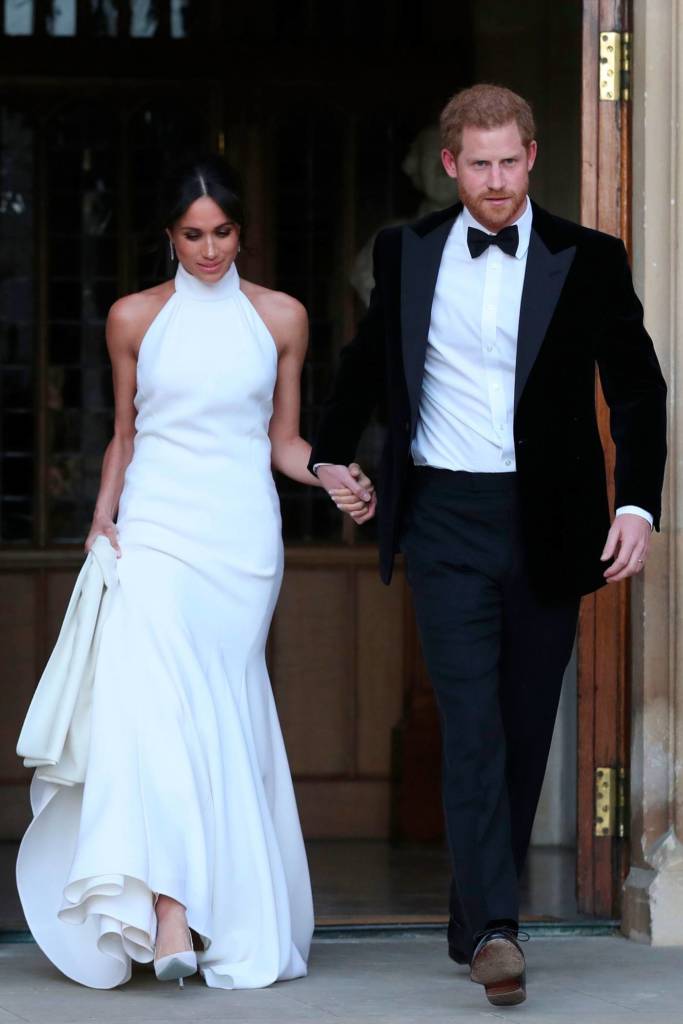 Markle stuck with simplicity for her second gown, which she wore to the reception and dinner. Designed by Stella McCartney, the white silk crepe dress followed the minimalist tones of the first gown, but with a high neck and open back. “It has truly been one of the most humbling moments of my career and I am so proud of all the team on this stunning sunny royal day,” McCartney told WWD, describing the experience of designing the gown. Like the first, this dress was beloved by Londoners. 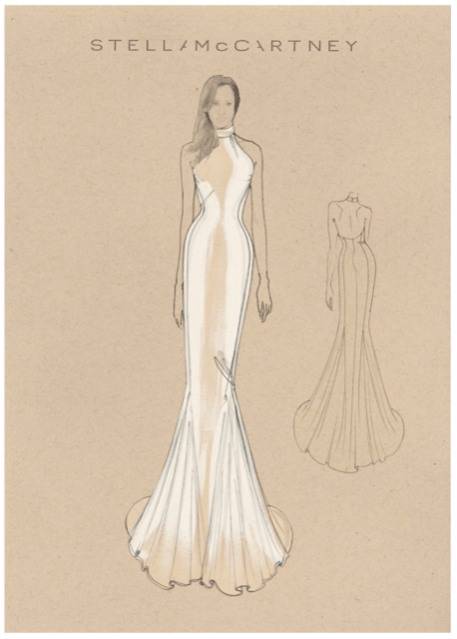 The fashion sketch of the gown. Photo courtesy: Stella McCartney

Tell me—what was your experience of viewing the Meghan Markle and Prince Harry’s wedding? Which outfits were sartorial “Dos” and “Don’ts” for you? Was the wedding dress too simple for your tastes, or just right? Was there a guest’s outfit you particularly admired? Share your thoughts with us at PurseBop in the comments below—we know each other’s opinions so well at this point that we’re dying to hear more voices on the occasion.

I’ll leave you with one last thing, on the off chance you need to be reminded of the royal wedding’s fairytale-like quality: 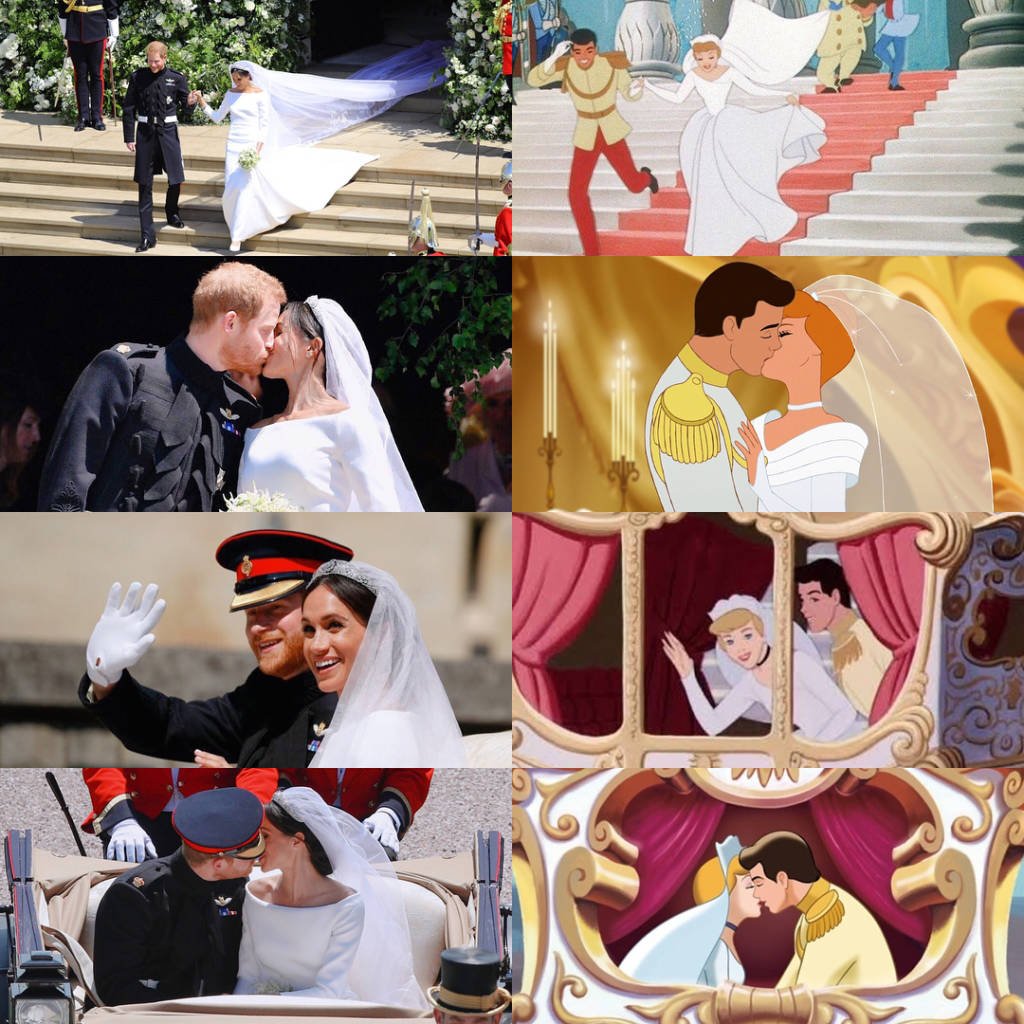 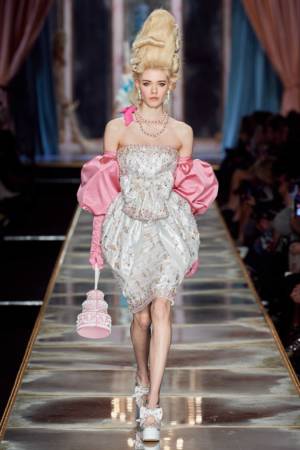 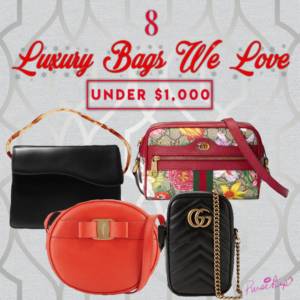 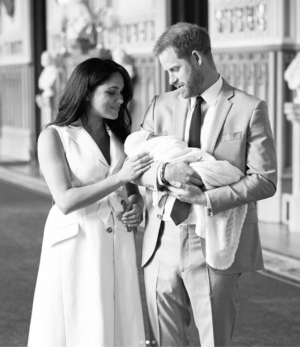 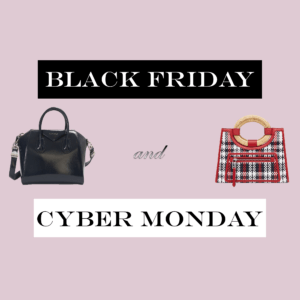 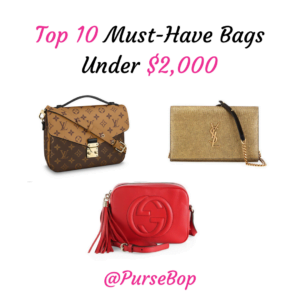 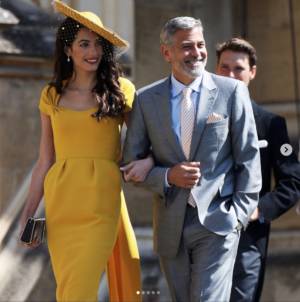