Chanel Reveal: Is this is the Year of the Perfect Pink Classic Flap?

Part I: New Chanel Colors for 21S are TDF and Here’s a First Look at the Classic Mini with Handle! 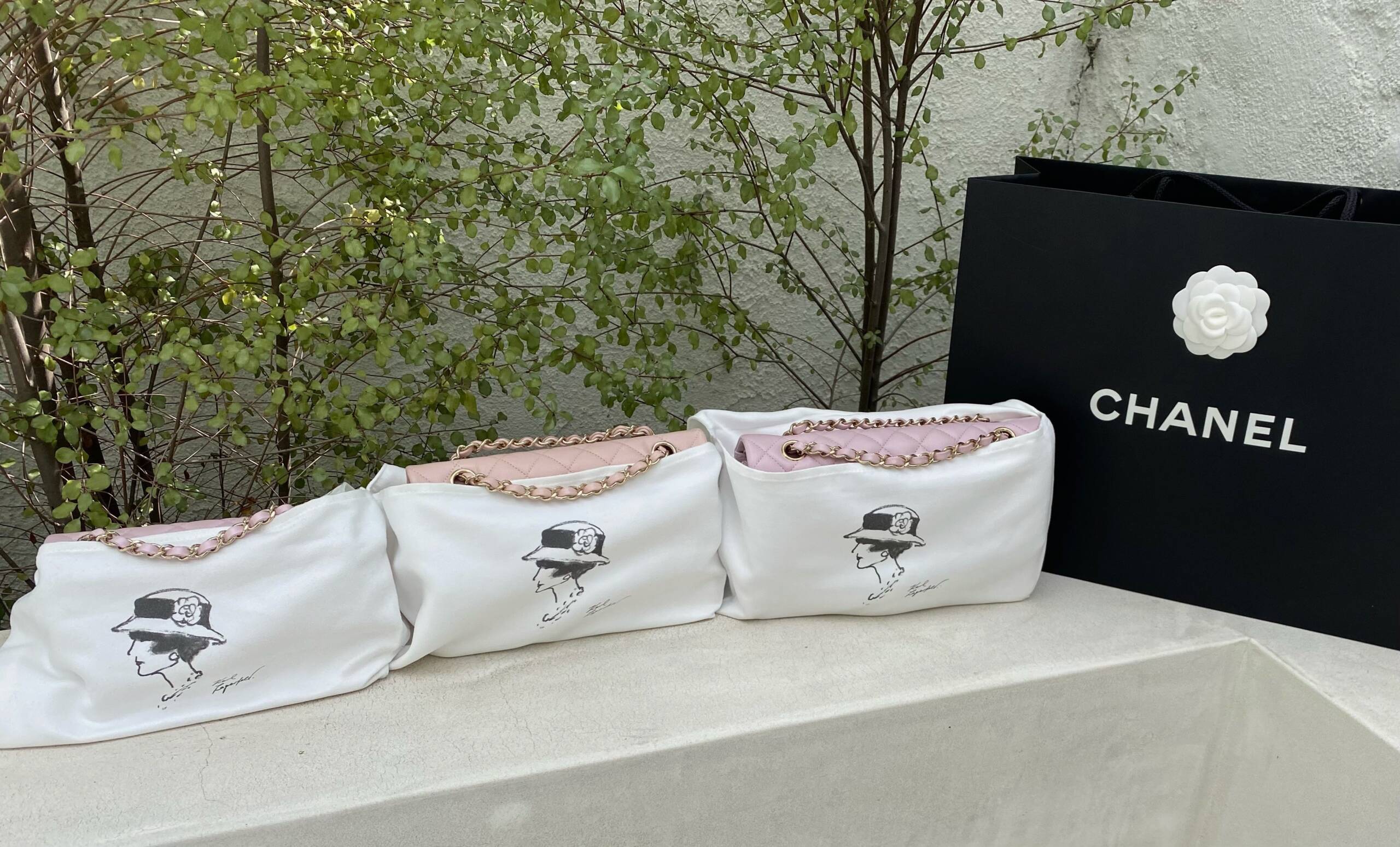 In early February, 2021, I revealed to you my good fortune in scoring the highly sought after Chanel 21C light pink Rose Claire small classic flap (read: The Chanel Frenzy Continues, Reveal: How I Got my Special Piece from Chanel 21C).
I was convinced it was the perfect pink neutral bag. It is a soft, blush pink classic flap in grained calfskin (caviar) that is a true timeless classic. Capturing its beauty is difficult in photos as it changes colors based on the lighting, time of day, and location.

In March, my good luck continued. I am now the proud collector of not one, not two, but all three pink classic flaps that were released in 21C and 21S. Let me explain why one Chanel pink classic flap isn’t enough! 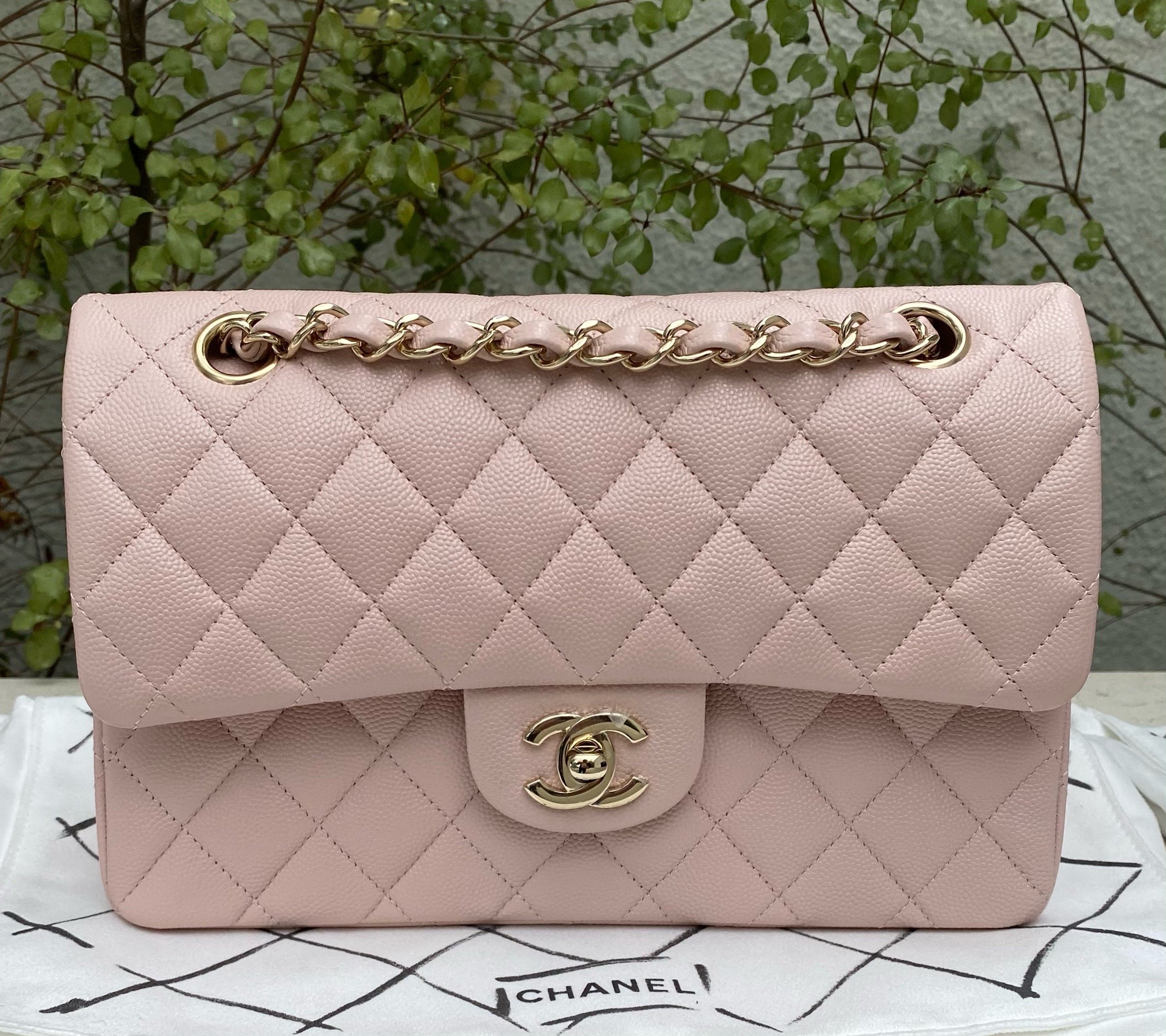 The name “Rose Claire” (or Clair) is not a name used in the United States, on Chanel’s website, or by Chanel sales associates (SAs). The name is regularly used in France to describe the different shades of pink (and other colors also). Pursebop community member, @fashion_and_french_fries, educated me on the names used in France to describe the pink classic flaps that were released in 21C and 21S.

It is unfortunate that Chanel boutiques in the U.S. do not have a consistent way of describing the shades of pinks and other colors released each season. As a result, many of us are forced to ask our SAs to place us on a waitlist for a specific hue that no one has seen in person. There is no guarantee that the bag you ultimately are offered is the color you want. If you have a picture of the bag, the bag code, and the color code, you have a better chance of being placed on the correct waitlist.

Despite this clarification, it is interesting to note that the 21C Rose Claire Chaud color code is NA116, Pale Pink. The 21S Rose Dragée and 21S Rose Claire Lila both have a color code of NC022, Light Pink. However, all three receipts from the Chanel boutique state the color of each bag as “Rose.” Confusing for sure. 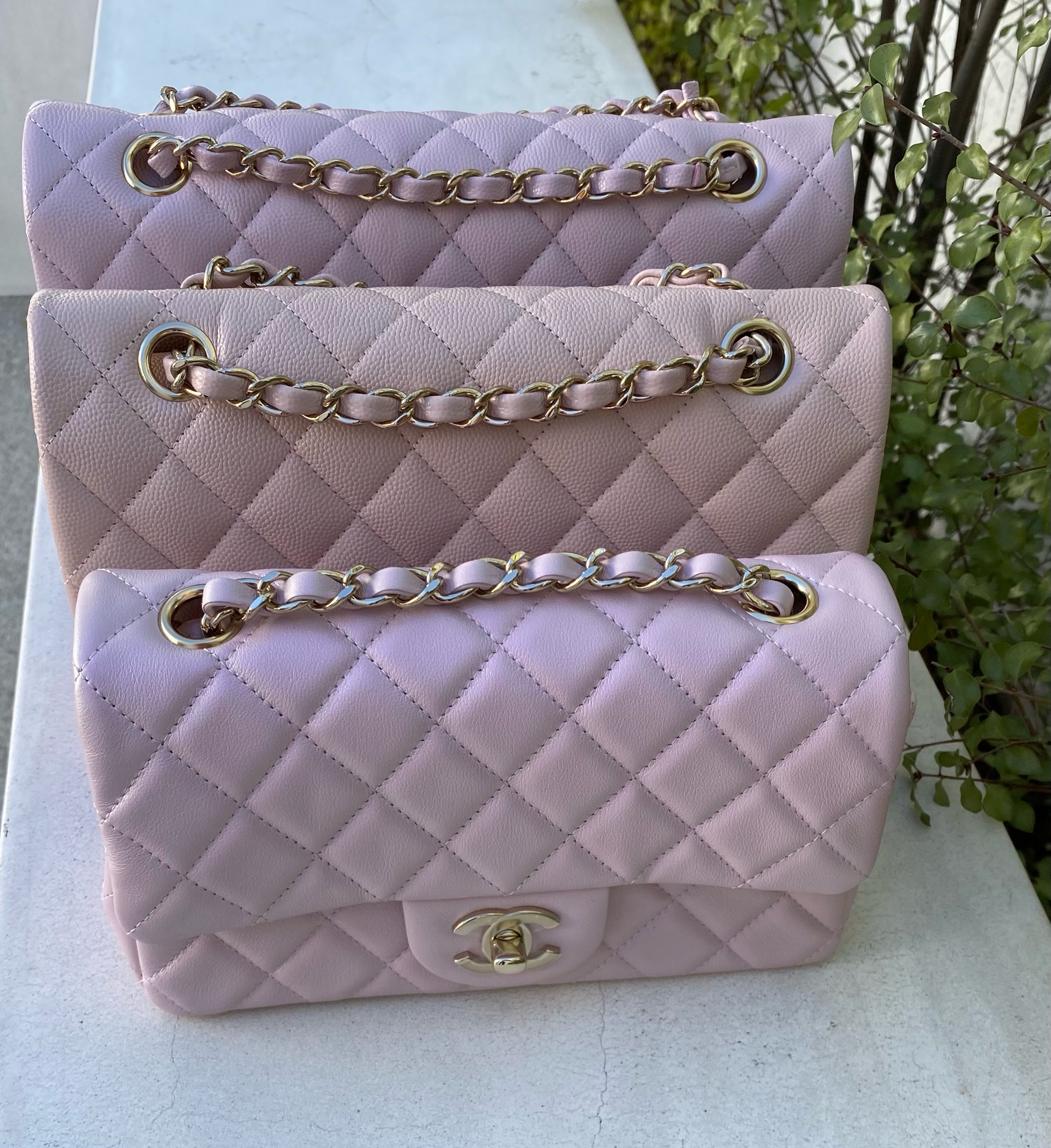 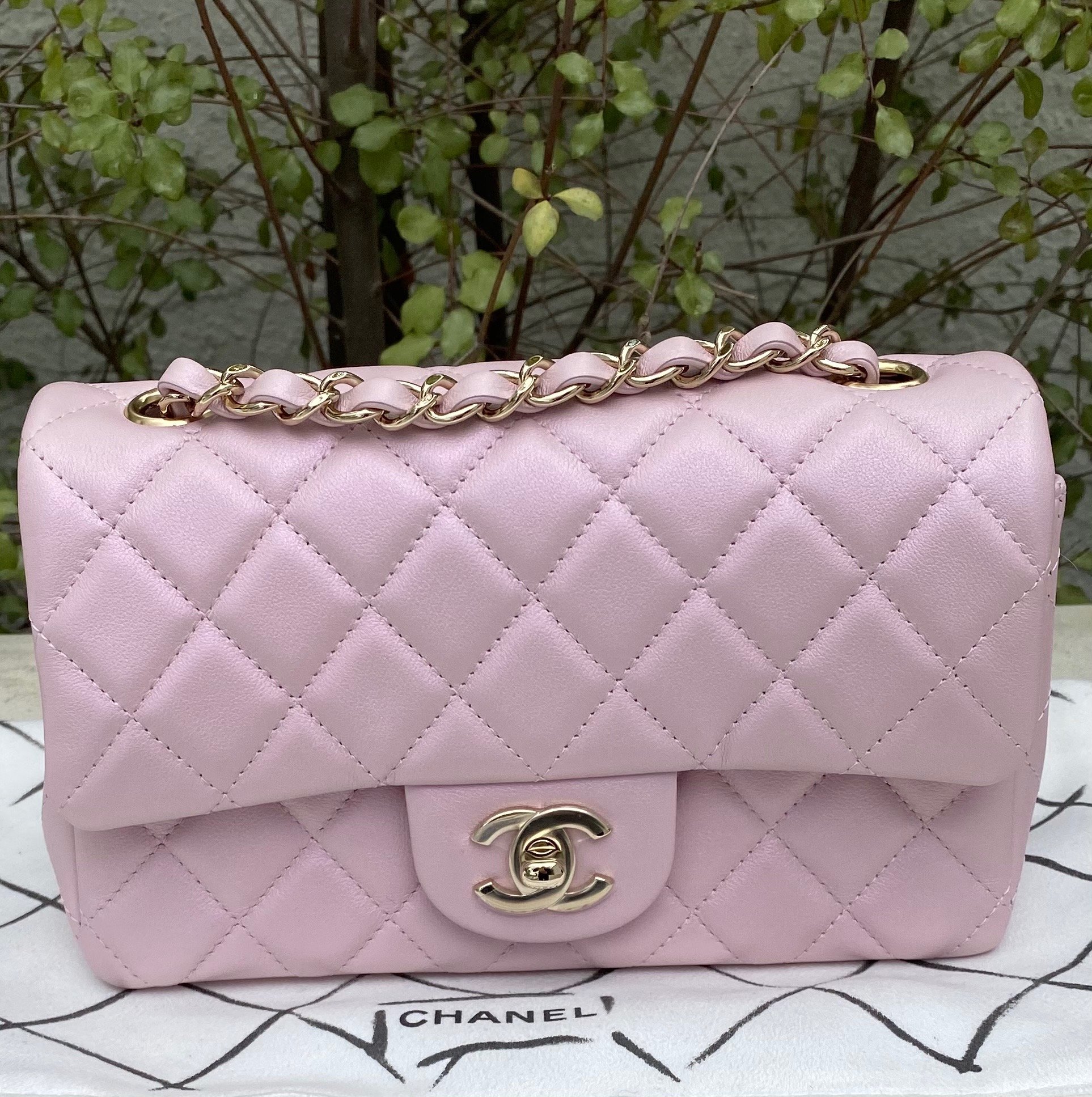 After receiving my Chanel 21C Rose Claire Chaud small classic flap bag in February, I saw photos of the 21S iridescent Rose Dragée mini classic flap bag. The color was a deeper soft pink with a hint of lilac. The iridescent smooth calfskin (non grained) made the bag shimmer and glow. It took my breath away. I never considered owning a mini flap bag. It is the size my 22 year old daughter uses.

“It’s here! Literally obsessed with this mini. Which card can I charge? You are a very lucky client to get this unicorn piece…”

I did not hesitate and sent him my credit card immediately. A few hours later I was in the boutique picking up my new Chanel mini flap bag in iridescent Rose Dragée calfskin. I could not believe that I had scored a second pink classic flap bag in a month!

The iridescent pink color, with a hint of lilac, was so amazing I could not imagine another Chanel pink bag could take its place. I photographed it. I posted it on Instagram. I used it crossbody and as a shoulder bag. I even found several tops and jackets in my closet that matched the bag perfectly. I was excited, happy, and content with my mini. 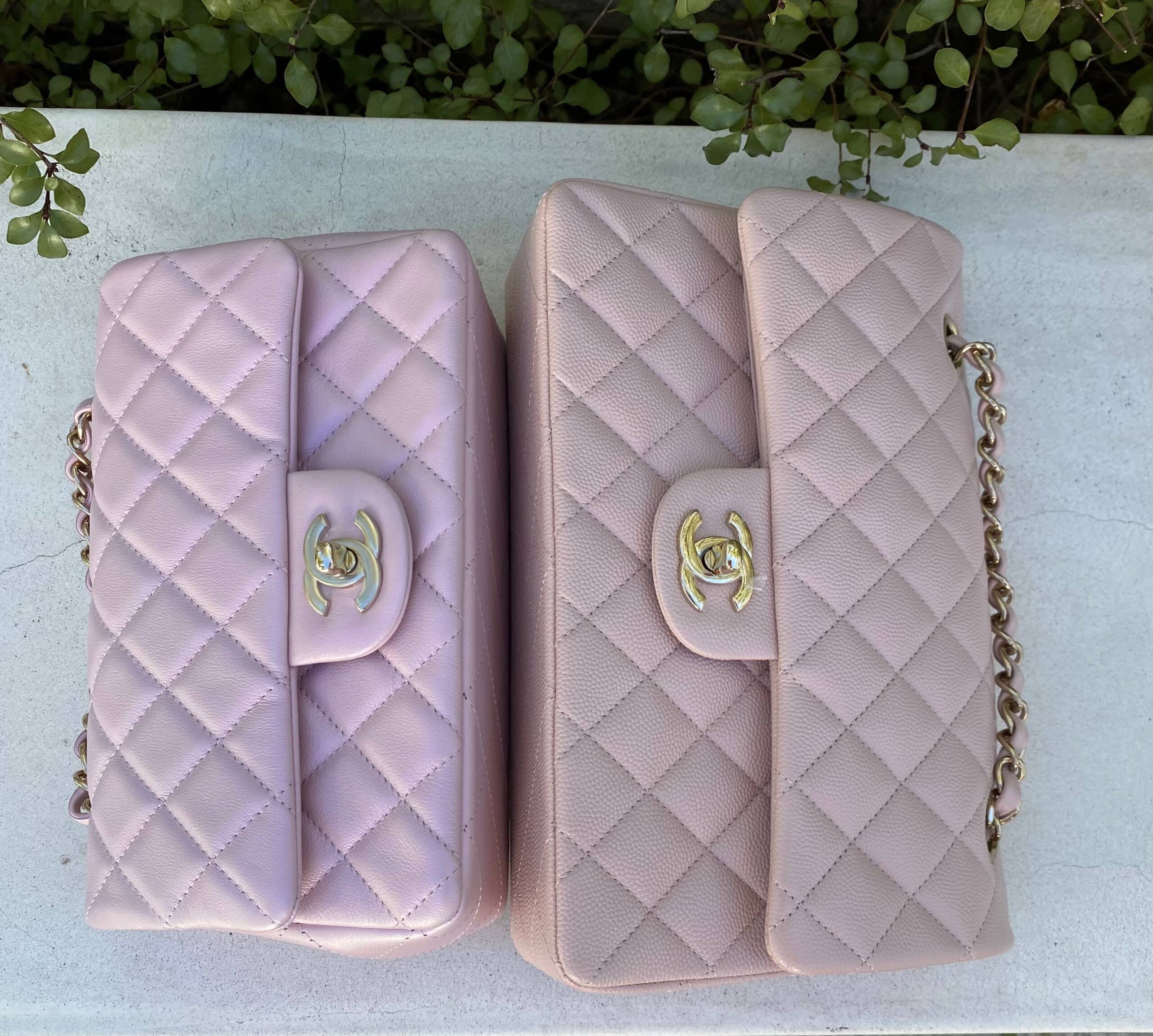 The very next day I saw photos of the 21S medium classic flap in Rose Claire Lila grained calfskin (caviar). I immediately fell in love with the matte caviar version of the iridescent pink mini. I had to have that bag as well to complete my growing pink Chanel bag collection!

But who did I think I was? Most people could not get their hands on one Chanel pink Rose Claire bag. I now had two and was asking for a third! But this matte pink color with a hint of lilac was so amazing that I decided the 21S medium classic flap was the “perfect pink” bag I was searching for.

I contacted my SA again and asked if I could be put on the waitlist. I sent him photos of the bag and the complete bag code and color code. I wanted to be sure he knew which bag I wanted.
He replied:

I don’t see caviar in the mix but will keep you in mind. Happy you are enjoying the mini.

I did not really think I would be offered this bag. Not only do I have two already, but I assumed there were scores of people on the waitlist by this late date. However, surely there’s no harm in asking. The very next day my SA texted me the following:

I am showing an advance shipping notice. Will let you know if I score this one. Fingers crossed.

I had no idea what this meant but it sounded promising. Two days later he sent me a photo of the gorgeous pink medium classic flap and said:

Literally the most beautiful bag ever! Which card can I charge? 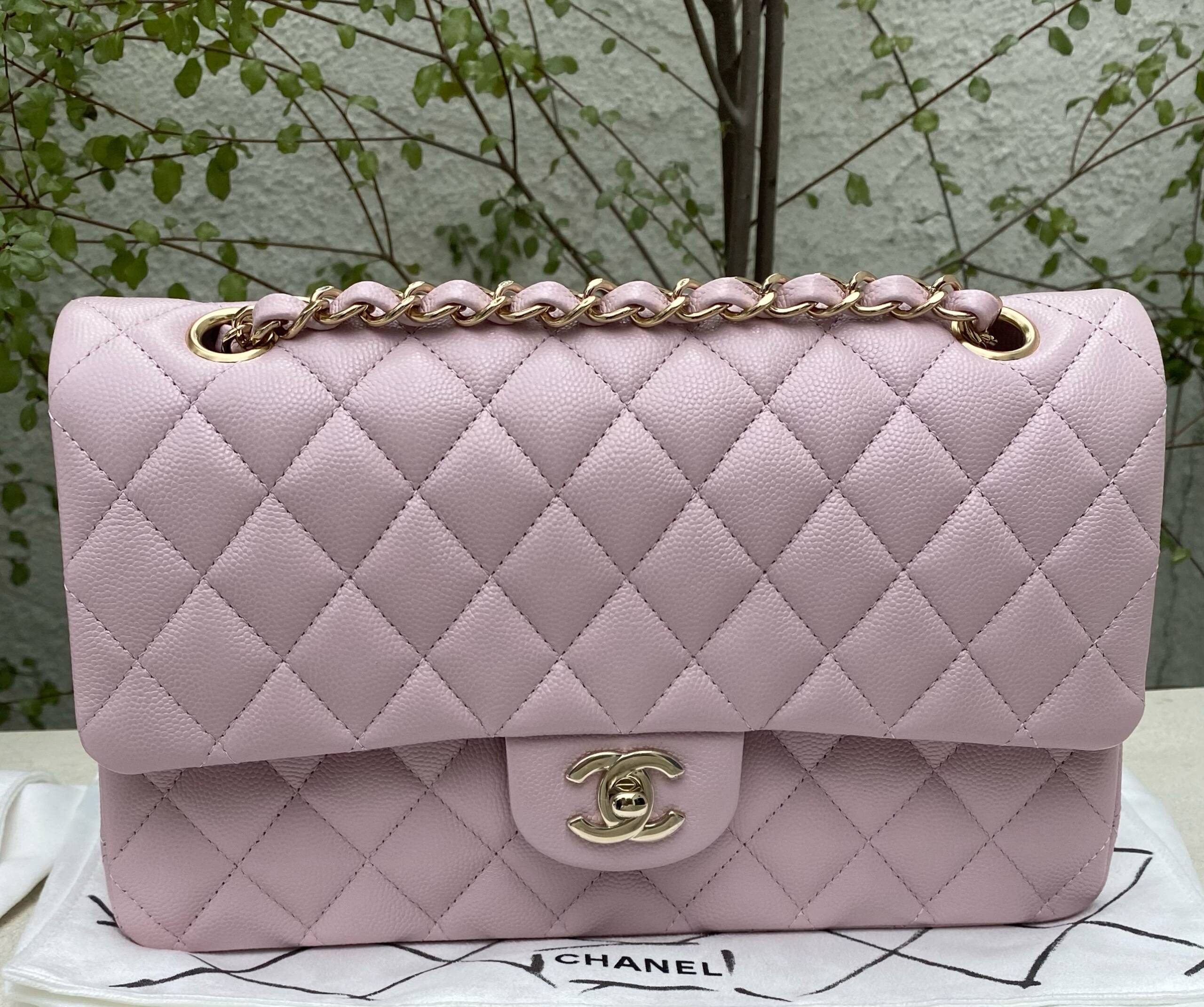 You might be wondering how I can justify keeping all three pink classic flap bags. A true handbag collector can justify anything. But seriously, they do serve different purposes. 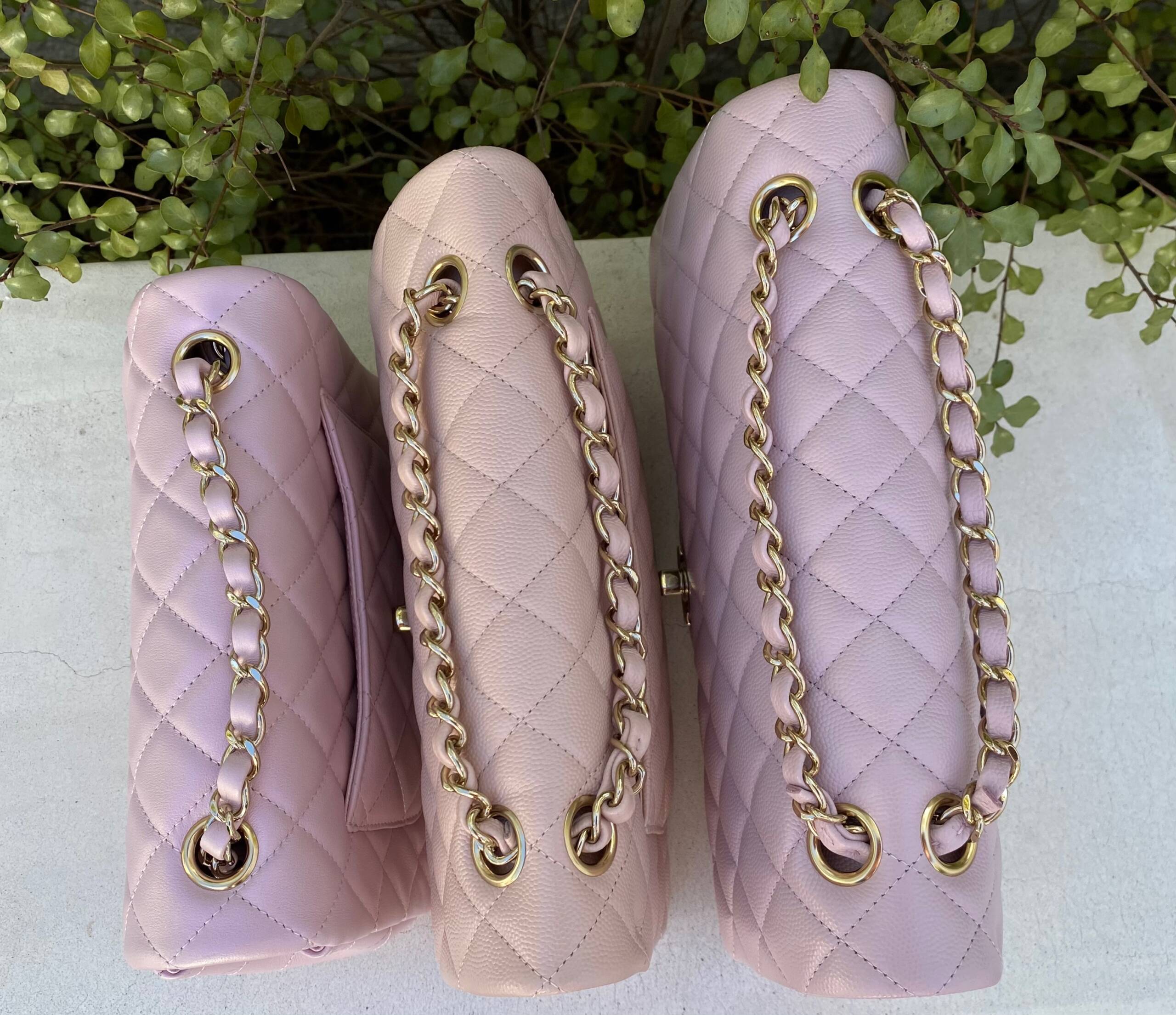 The mini iridescent Rose Dragée is a great travel bag. It is also a daytime event or brunch bag, and run around town bag that can be worn cross body or on the shoulder. It is lightweight, easy to carry, and holds the essentials.

The small Rose Claire Chaud is the perfect neutral bag with only a hint of pink. It will complement any color outfit. The small size also transitions best from day to evening.

The medium Rose Claire Lila holds slightly more than the small and also transitions brilliantly from day to evening. The color makes it truly a statement bag. 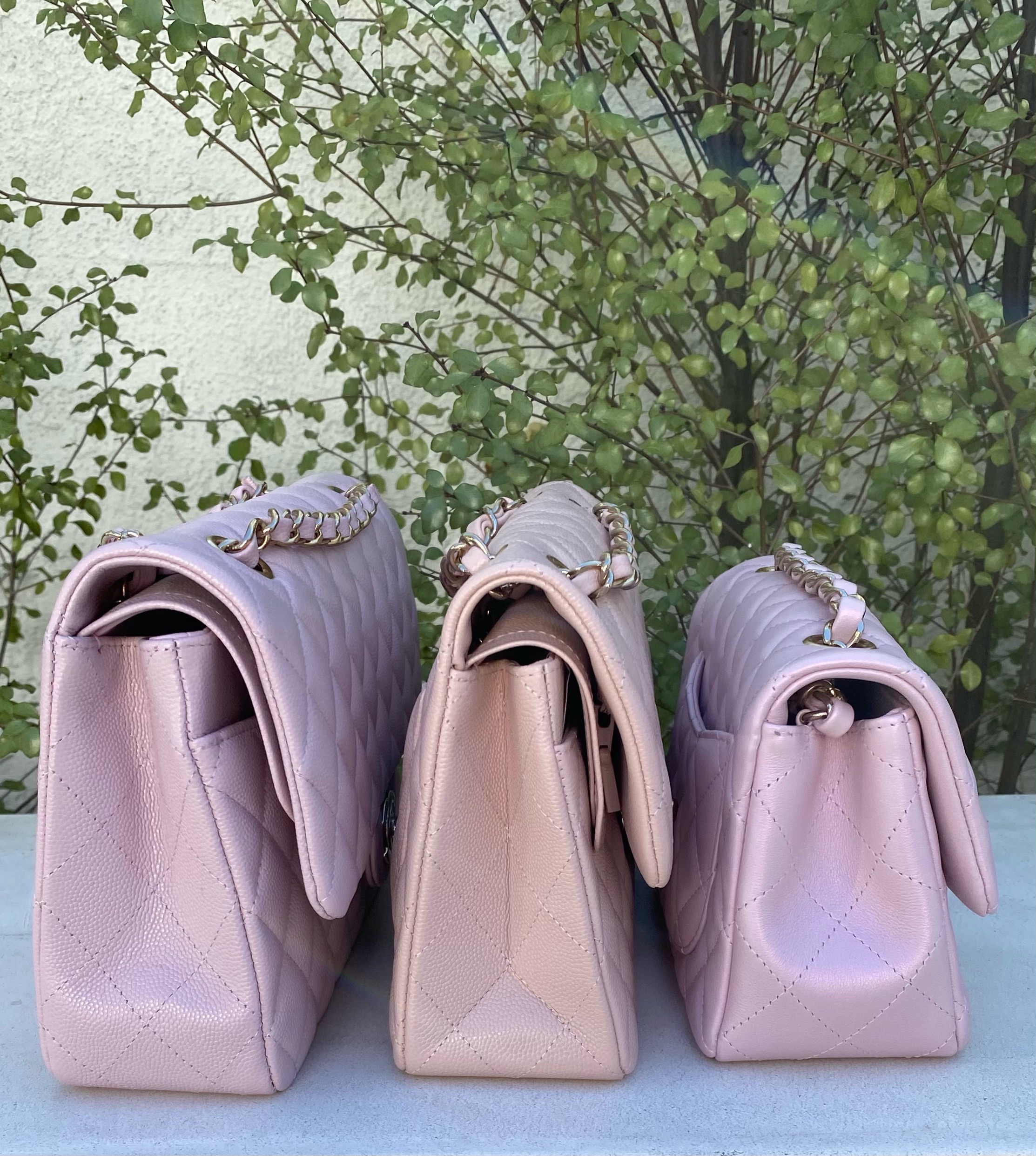 The mini classic flap and the medium classic flap are both the same color but in different leathers. The Rose Dragée mini iridescent is a smooth calfskin leather that shimmers in the light. The Rose Claire Lila medium looks different because it is a grained calfskin (caviar) leather which has a matte finish. Both are light pink with lilac undertones. 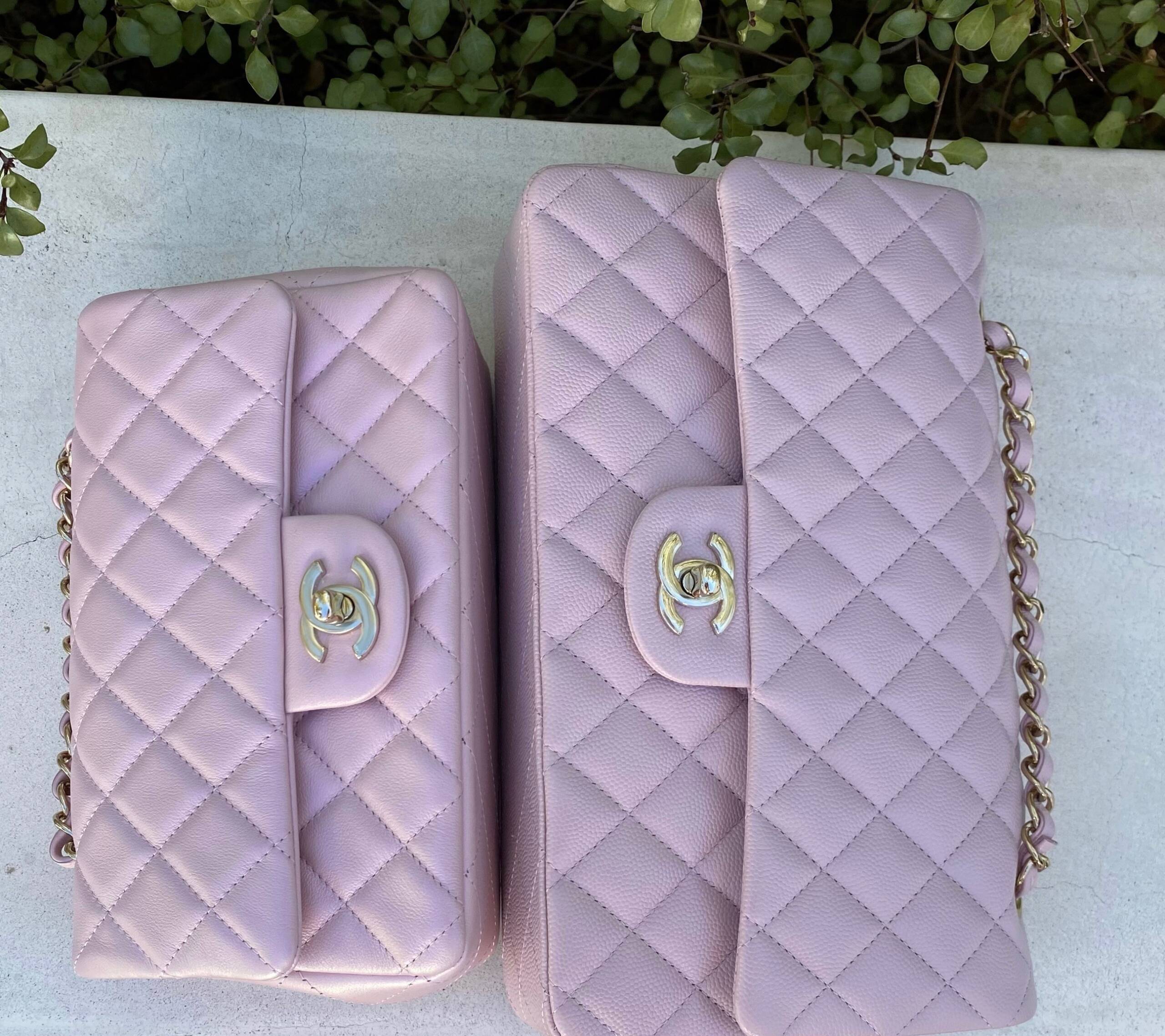 All three classic flap bags have the most beautiful light gold, (also called Champagne gold) hardware. The hardware complements all three pink bags. It is my favorite Chanel hardware because it looks great with gold or silver jewelry and accessories. 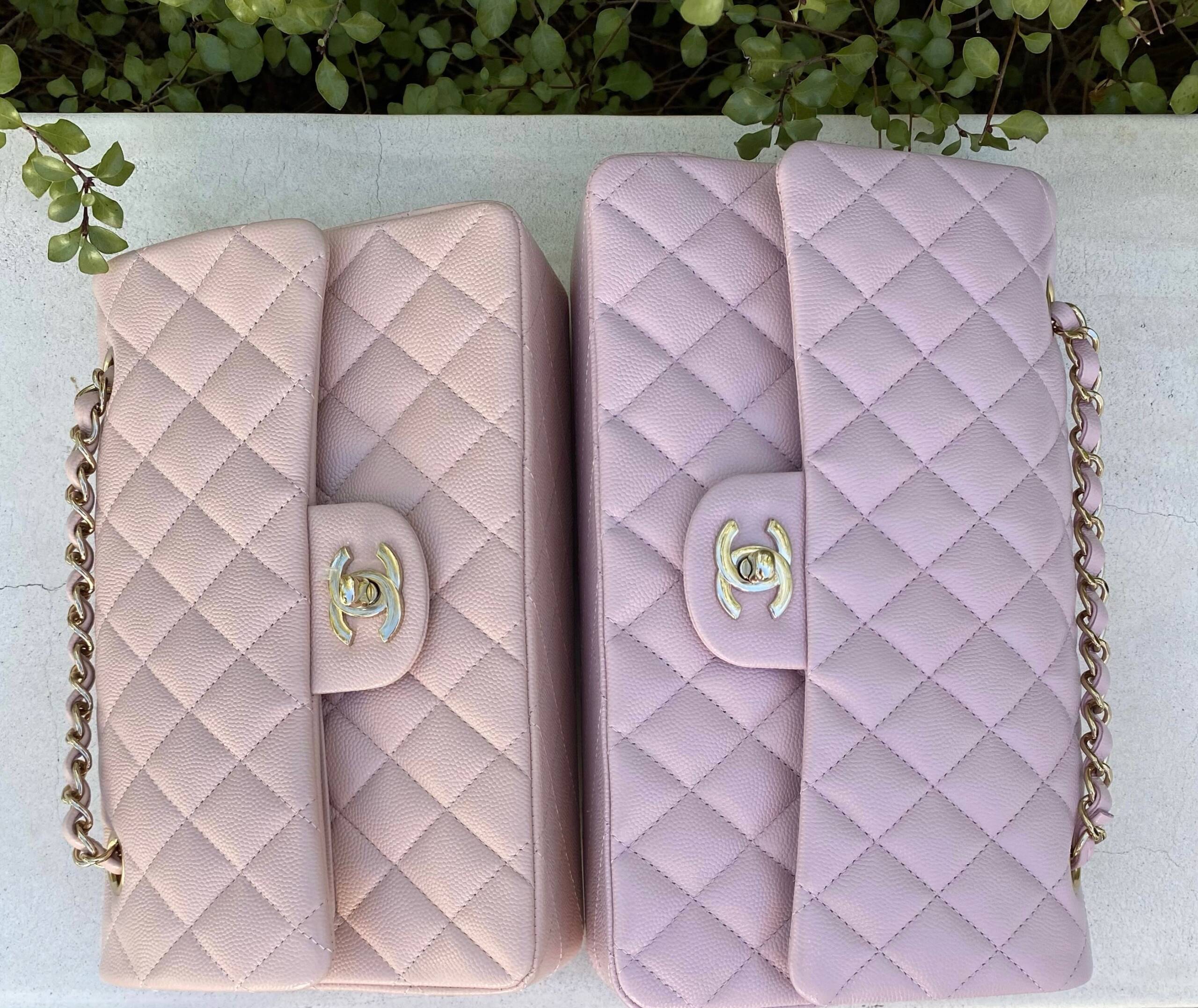 As a devoted pink handbag lover, scoring the perfect pink bag is part of the allure, the challenge, the hunt, that keeps me wanting more. Similarly, my Hermès pink collection is also a work in progress. Although I have a coveted K25 in Rose Confetti, a gorgeous K28 in Rose Pourpre, and a mini Bolide in Mauve Sylvester, I yearn for a K25 in Rose Sakura and 5P (Bubblegum) pink.

Now that I have secured all three pink Chanel Rose Claire classic flap bags recently released, I cannot imagine that another pink classic flap could rival them. But Chanel is full of surprises. Will my pink handbag collection ever be complete? Stay tuned.

It is a very exciting time in the world of Chanel. The ready to wear is amazing. The sneakers, sandals, shoes and boots are on everyone. The spring/summer handbags do not even make it to the showroom shelves for viewing or purchase.

Read:
The Chanel Caramel 21P Frenzy – The Race for the Classic Flap is On Again
New Chanel Colors for 21S are TDF and Here’s a First Look at the Classic Mini With Handle)

Beginning with the release of the elusive 21P caramel, to the two-toned candy colors of pink, yellow and blue with rainbow hardware, to the 21C pink Rose Claire Chaud, to the 21S iridescent mini Rose Dragée, to the medium classic flap grained calfskin Rose Claire Lila with lilac hints, to the new 21S mini classic with a handle in metallic and iridescent caviar colors, to the neon pink, yellow, orange, and blue in mini and medium classic flaps, Chanel keeps them coming. That is a lot to take in especially when the supply is so low and the demand keeps growing.

My advice is to text or visit your SA in person. Ask to be put on the waitlist for any bag or color you want to fill the void in your collection. Then sit back and see what arrives this summer in Chanel’s 21A and 21B collections. You are sure to be surprised and delighted.

Read related articles:
Is it Worth a Ticket to Paris to Buy Chanel?
Here are the New US Chanel Prices for January 2021
The Chanel Caramel 21P Frenzy – The Race for the Classic Flap is On Again
Small Remains Big for Chanel Spring 2021
A Complete Guide to The Chanel Trendy CC Bag 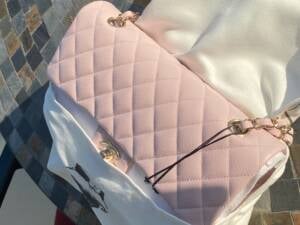